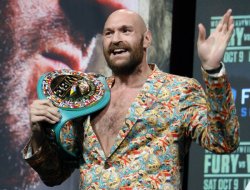 “Fury? It’s complicated there… — Hearn smiles. – This dude first claims that he will never give a fight to Anthony Joshua. But three days pass and Tyson, as if nothing had happened, says that he will not end his career until he fights Joshua, that he needs this fight straight from the nose. After all, I see that even the fans are gradually beginning to understand that Fury’s words make no sense. So keep talking.”

“To be honest, I wouldn’t even be surprised if Fury fights Joshua instead of Usyk,” Hearn continues. “Moreover, this fight is simply unrealistic. And the parties understand this, which can lead to a duel literally at any moment. I guess Fury is really interested in legacy. And if so, then he knows that he needs a fight with Joshua, because this is the biggest fight in boxing of all time. And let him say as much as he likes that he does not consider Joshua a worthy opponent. But it’s not. And he understands very well that this is a tough fight, a competitive fight.”

Earlier, Hearn said that the heavyweight belts would be vacant soon. And the conqueror of two weight divisions, David Haye, argued who was to blame for the fact that the Fury-Joshua fight did not take place.