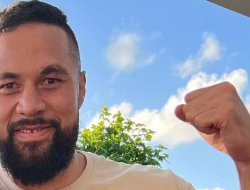 Ex-WBO heavyweight champion Joseph Parker (30-3, 21 KOs) will try on January 21 to cover last year’s early defeat from Joe Joyce with an even brighter performance, this time in his favor. Judging by the mood of the New Zealander, the little-known Jack Massey (20-1, 11 KOs) AO Arena in Manchester (England) will be hard.

“I have to restore my reputation. I left my family for Christmas and New Years, training in England… I’m going to make sure it’s not in vain. They will beat him and smash him as soon as I can,” said
Sky Sports the usually sweet and quiet Parker. “After such a defeat, you need to come back and show yourself very cool, and that’s exactly what I’m going to do.”

As Joseph put it, “an explosive finish is what we all want.”

Parker: “I’ll wrap myself a present, put it under the tree, sit next to me and sing a song”

“Him [Мэсси] can be a little hard to catch and I studied him, he’s a tough guy. But I don’t think he’s on my level. Maybe he saw something in my last fight that he could work on to beat me. But my goal is to go out, break it up and start the year with a bang, ”Parker said simply and without a second thought.

Recall how Joseph’s last fight ended. Here’s a feel good shot of the day after it.