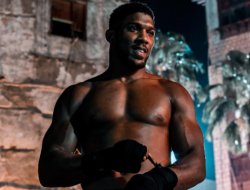 The Briton does not hide that he is going to literally smear Usyk on Saturday, and openly demonstrates how he prepares his hands for the tough removal of the Ukrainian.

“I refuse to lose,” he now declares at all, accompanying the refusal with a new video of past training days under the leadership of Angel Fernandez and Robert Garcia.

Meanwhile, a skeptic from Britain predicts Joshua’s entry into Usyk and the end of his career, and Fury showed Joshua how to beat the “fat middleweight” Usyk.