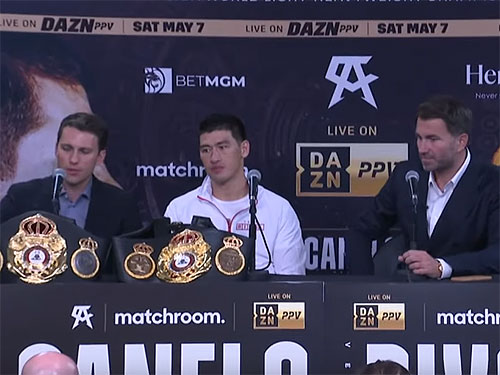 After another successful defense of the WBA Super title, Russian Dmitry Bivol (20-0, 11 KOs) gave a press conference for the American media.

Answering journalists’ questions, Dmitry
told about the victory over the absolute champion of the second middleweight (up to 76.2 kg) and the leader of the pound-for-pound rating Mexican Saul “Canelo” Alvarez (57-2-2, 39 KOs).

Recall that last night in Las Vegas, Bivol beat Alvarez with the same score of 115-113 according to all three judges.

What was the key to your victory, in your opinion?

– You know, the whole fight I had to be focused. I saw him throw only heavy punches. After heavy blows, he was a little tired. You know, Canelo is a good fighter as a counter puncher, but I forced him to go ahead and I was the counter puncher today. This was the key.

Dimitri, you beat Canelo 152 to 84. Are you surprised how easy it was for you?

Fight Canelo Alvarez – Dmitry Bivol: statistics of the blows of the fight

– There was a lot of criticism on you for the fact that your fights were not spectacular. You answered all the questions today by fighting the fight of your life. Are you impressed with your performance?

You know, in my last fights, I didn’t enjoy the fights because they weren’t challenges for me. I was just defending my title against some guys and everyone was betting on me. And today I enjoyed the fight. I saw, I heard a lot of fans screaming and that motivated me today. I really enjoyed the fight.

Did Canelo’s greatness suck the greatness out of you?

– Of course, if my opponent is better, then I show the best.

Did you expect Canelo to be better today?

No, I didn’t expect it to be better. I expected this. I believed in myself. I believed that I could win. I knew he was hitting hard and he would hit my body, my arm, that he would throw a left hook. I expected it. And he did it.

– What is your opinion about the rematch?

– First of all, my dream is to become an absolute champion. I had the opportunity to fight against the best fighter, and I accepted this fight without any special reasons and conditions. If we talk about revenge, then let’s negotiate. But there will be other conditions.

– Did you feel this fight differently compared to other fights?

Yes, of course he was different. Because all week I’ve been sitting in my room. I was bored, I couldn’t leave the room. I’m tired of this. I saw how much attention this fight attracted.

Did you talk to Canelo after the fight?

– What is your message to the fans who underestimated you?

— I have a message for those who bet on me today, who won [смеётся]. Congratulations guys [смеётся]! But for those who didn’t believe in me, it’s just their opinion. And I appreciate that they bet on Canelo, believed in Canelo. This is fine. No problems.

Dmitry Bivol – Canelo Alvarez. Video of the best moments of the fight

— You just beat number one pound-for-pound. Do you think you took his place?

– Honestly, no. I just beat a fighter who wanted my title. In my mind. And he was super middleweight. Yes, he had a light heavyweight belt, but I don’t feel like I’m king today. I just beat Canelo.

What will you do differently in a rematch?

– Most of us in the ringside the score was 10-2 or 9-3 in your favor. It looks like the judges were trying to maybe rob you.

— I thought about it a little when I heard 115-113. I thought maybe I lost today. But I felt like I won. I expected it. Everything today was against me. Even Eddie (Hearn) congratulated me, smiled. He is happy for me, but not so happy [смеются].

– Do you have an opinion that you are one of the best light heavyweights, but they don’t talk about you enough, underestimate you?

– At what point did you feel that you were in control of the fight, regardless of the fact that he was trying to hit you with strong blows?

– From the beginning of the fight, I saw his blows, what he wanted to do.

Bivol – Alvarez. The best photos of the fight

– Can you describe a situation when in the fifth round he was on the ropes, and you had a good series of hits?

To whom do you dedicate this victory?

Whoever it is, when do you think you’ll be ready to perform again?

– I do not know yet. I need to rest for a few weeks, then we’ll talk to my manager.

What did he do to give you the opportunity to fight the way you planned?

“You know, I just expected him to throw heavy punches. And I was ready for it. I tried to give it to him. I tried to defend myself and then tried to answer when he got tired. It’s because we had good sparring partners with similar jobs as Canelo.

– Did you have the feeling that the whole world is against you, or is this nothing new for you?

— Not new. I know how people love Canelo and that’s okay. He really is the biggest fighter in the world. He is a champion in 4 weight categories. He has four belts. Of course, everyone is on his side. And no problem for me.

– Your national anthem was not played before the fight, they played the American and Mexican anthems, but not the Russian one. Was that the motivation for you in the fight to be respected for the champion and his title?

– You were more concentrated, then you were more relaxed, you were joking somewhere. Was this part of the plan for the week?

You know, I’m just tired of being serious [смеётся]. Too serious things in my head.

Q: Canelo’s strength question. Have you felt its power? Is that light heavyweight for you? Was there an episode where he shocked you in a fight?

“Yes, of course, I felt his power. He has really good strength. But you know, he has good speed, good strength, good sense of distance. You know, some people are born with power. This is an innate strength. I don’t have natural strength. I can hit hard when I focus and want to. But there are some people who just throw hands, but they are very tough. They have this natural power. With Canelo, I didn’t feel like he had the natural strength for that weight. He really tried to charge, he really tried to invest in every blow. This is not a natural force. This is the strength that he himself has gained.

– The judges gave him the first 4 rounds, does this surprise you?

Now I’m glad I won [смеётся]. It doesn’t matter, 4-5 – I won. You know, I felt like I won. When I saw that people saw my victory, that’s great. It’s better when you feel that people have seen your victory. I tried to win for the people, not for the judges.