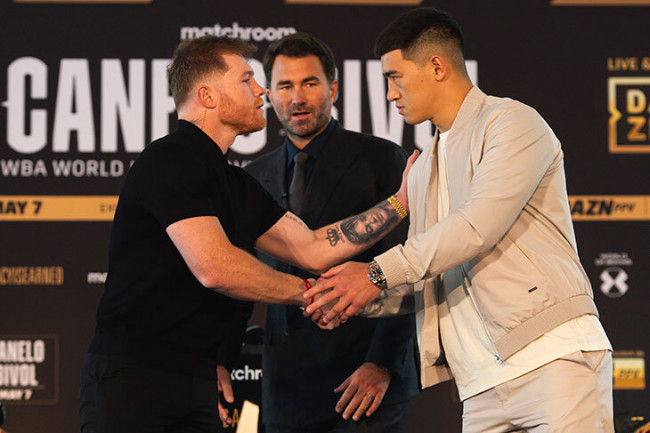 On May 7 in Las Vegas (USA), the undisputed super middleweight champion Mexican Saul Canelo Alvarez (57-1-2, 39 KOs) has a difficult task – he will try to inflict a debut defeat and take away the WBA Super title from Russian light heavyweight Dmitry Bivol (19-0, 11 KOs).

Former Canelo Promoter Legendary Bernard Hopkins Claims No Difficulties
Bivol will not create a favorite: “He will smear it into mashed potatoes. Why do people say otherwise? They are just delighted that he will again go on stage and again remain on top of the mountain. This is what people want to see. Bivol’s advantage in anthropometry? It could decide the outcome of the fight if Canelo didn’t have all the skills he has. So the “good big fighter” and “good little fighter” theory won’t work here. This is not the case”.

Bivol’s chances? Fantasy on another floor. In fact, everything here is so obvious. The only danger for Canelo is Jermall Charlo. At least that’s how I see it. David Benavidez? Canelo will smear it, turn it into a puree. Gennady Golovkin? I’m sure Canelo will be even stronger than he was in the second fight with him. And that doesn’t sound very good for Golovkin’s prospects. We have already seen two fights between them. What’s the point of having a third one? Just so that Canelo can mix up Golovkin too? Well, OK. He will mix it up. But it will still be a slightly different type of batch,” Hopkins said.

British legend Ricky Hatton said recently that Alvarez will never lose to anyone again. And the boss Top Rank Bob Arum is leaning towards Canelo’s victory over Bivol. Interestingly, in our prediction for this fight, we offered to bet on the underdog.