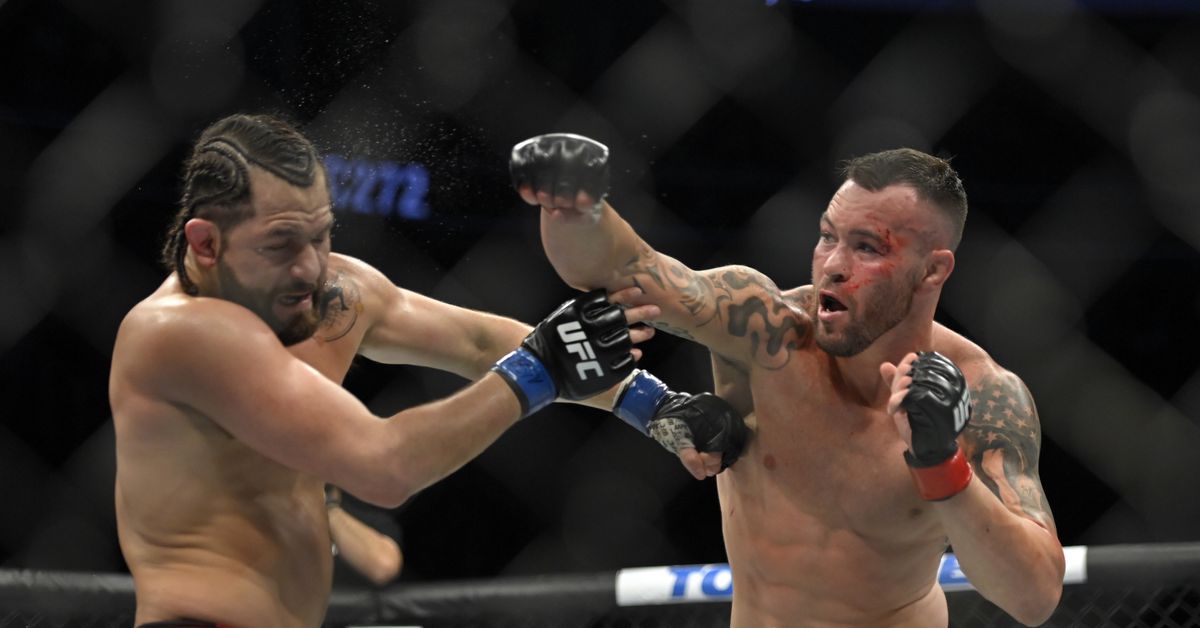 UFC 272 took place March 5 at the T-Mobile Arena in Las Vegas. Colby Covington (17-3) and Jorge Masvidal (35-16) squared off in a five-round, welterweight contest, which aired live on ESPN+ pay-per-view. You can see more highlights of the video below.

After a shining performance, @ColbyCovMMA wants the Diamond next #UFC272 pic.twitter.com/UeNfRTbWou

Masvidal says he just didn’t have it today. #UFC272 pic.twitter.com/QF0Y3ihLjb

Covington is a wizard on the mat

They were ready to keep going after the bell

Expect Chaos From This Point On! @ColbyCovMMA has arrived for #UFC272 pic.twitter.com/DiLUz3slfq

For more on Covington vs. Masvidal, check out the live blog by MMA Fighting’s Jed Meshew.

Covington out in southpaw with Masvidal in orthodox and Masvidal runs in for a knee but Covington is not playing that game. It is a long distance to begin with Masvidal feeling light pressure and Covington feeling space.

Masvidal landing a good low kick early and Covington immediately switches stances. Covington moves forward and Masvidal complains of an eye poke. Herb Dean does notthing and Covington uses that opportunity to grab a clinch and force Masvidal to the cage. Covington gets a body lock, Masvidal takes him down and then he is back up.

Masvidal is now free to ride, but Covington continues on. He drags Masvidal back down who immediately gets to the cage and stands again. Covington returns to mat again, this time higher on his hips and moving towards the backpack. Brief threat of a choke but now Masvidal is abandoning the scramble to play defense. Smart but this is what Covington wants.

Covington with one hook in and Masvidal against the cage, defending the choke. Covington landing a few short shots but he’s really trying to slide under the chin. He’s also keeping his spot because of how strong his hips are overtop Masvidal. Now Covington breaks the arm down of Masvidal and he’s in 3/4 mount while Masvidal goes 2 on 1 with Covington’s left hand. Covington lands a shot to the back of the head and gets a warning but Covington just passes to mount.

Masvidal’s hip moves away and he gets back on his feet. He then manages to land an elbow and break the hip in a short amount of time. Covington is moving weird in space and he may have come into this fight with a bum knee. He does land a combo to end the round though.

MMA Fighting scores the round 10-9 Covington.

Between rounds, Dean gives Covington a stern warning for the eye poke in Round 1. Covington opens round by opening it with a missive head kick. Masvidal does not even try to engage, but he slips.

Strong low kick from Masvidal lands. Covington throwing numerous head kicks but not consistent pressure. Masvidal has been keeping the fence in check and is now starting to throw a jab. Impressive footwork from Masvidal though, he’s not getting back up like normal.

So since he can’t get what he wants, Covington just rumbles forward, grabs a body lock, and backs Masvidal to the cage. Masvidal gets big elbows, but Covington keeps on fighting. Low blow from Covington causes Dean to break the two up and THE PPV DIES.

What the. . . No clue what is happening right now. It could be any thing.

The stream is back, and there’s a lot of people getting up. It seems Masvidal has been doing very well. The commentary says something similar and that Covington has been getting wild.

Covington lands a good right hand, trips off a kick, and this time Masvidal follows him down but Covington immediately sits up and forces a wrestle which he wins. Covington takes the back, but Masvidal stands on the fence. He breaks quickly.

Covington keeping Masvidal on his toes and pushing him against the fence. He’s pressuring now and landing some good punches before diving in on a clinch again. Masvidal gets separation but Covington is staying on him now. Masvidal gets an immediate reaction when he lands a knee, but Masvidal reacts with a large left hand. These two are scrapping.

MMA Fighting scores the round 10-9 Masvidal but since we missed half the round, anything could be valid. 19-19 overall.

Covington looking a little tired at the start of round 3 but he comes right across the cage to start. Masvidal with a body kick. Covington really getting on that pressure now and he’s got Masvidal against the fence. Masvidal is running away from it, landing shots but he hasn’t gotten to rest on his laurels yet.

Covington puts Masvidal up against the fence. He shoots a double, which he finds much more manageable this time. He’s stacking the legs and Masvidal finally surrenders and gets his guard. Covington begins to move with his elbows and breaks his posture. When Masvidal holds him, Covington lands to the body.

Covington is letting loose some elbows here, and someone is already bleeding. Masvidal doesn’t even have a defense guard. Covington is slamming his hips, and chasing his ex-best friend. Masvidal is having a hard time deciding what to do at the bottom, and it’s only making matters worse. Chipping away from Covington as Masvidal goes full hold.

Now Covington moves to half guard, but Masvidal is looking at the fence with his back and trying to get up. Masvidal used Masvidal’s movements to grab the back, so it is possible that Covington baited it. Masvidal quickly goes back to flat on his back. There’s still 90 seconds and Covington is busting Masvidal up.

Masvidal trying to stand again and that’s giving up the back. Covington has a hook in and tries for a choke but can’t get enough of it. He keeps going and does get behind Masvidal though and he’s on a neck crank which makes Masvidal turn. Scramble! Covington, however is the better horse and now rides Masvidal as a turtle.

Masvidal fis able to stand finally and lands a good left hand just before the horn.

We are currently in the championship rounds. Masvidal will be down, but he looks well-prepared for it. He certainly starts the round well with some pressure of his own. He also kicks. Masvidal has been consistent with the kicks and Covington has even tried to catch one.

Covington bull rushes into Masvidal’s face, but he snubs him. Masvidal is backed up by the combo, but Masvidal attempts to force him into paying with the break. However, Covington comes back at him with a single leg. Masvidal defends but he’s still against the fence. Covington lands a baby right hand and back on the hips. Vintage Covington.

Masvidal falls but he doesn’t have enough gas and is staying put. After a tentative takedown, Covington scores a huge uppercut and Masvidal may be injured! Covington back on a takedown attempt though and so Masvidal is getting a breather. Covington is warned about grabbing the bottoms during this clinch.

Back at space and Masvidal looking tired now. Covington backs Masvidal up with a combo! Covington has hurt Masvidal on the feet and he’s pouring it on with Masvidal against the cage and covering up! Masvidal fires a big counter and Covington immediately stops playing with fire and clinches.

Masvidal seems to be recovering and they’re exchanging. Masvidal may have hurt Covington! Covington fell to one knee Another shot from Masvidal and Covington is in trouble but Masvidal isn’t jumping on him! Covington now brawls! Both men seem to be dead tired and don’t have enough gas to finish it! Covington clinches and they’re hanging on catching a breather. That was insane!

They break and the round ends without much happening.

It is amazing that neither fighter finished that fight. This final round could be wild and it’s certainly going to be all heart because both men look exhausted.

Covington is right there to begin the final round. He lands a combination to support Masvidal and make the shot a one-leg. Masvidal attempts to fight it off, landing some punches. But Covington wins it. Masvidal turns his back towards the fence, and then we’re back on the one-hook wrestling ride. Covington trying to get a choke in but Masvidal tucking his chin and safe.

Masvidal nearly up, but Covington drags it back. Now Covington is scoring some chipping shots at the defensive Masvidal. 2 minutes and Masvidal scrambles, getting to a single-leg but Covington is better and he’s able to ride it through and keep that back control. 90 seconds and we are back along the fence.