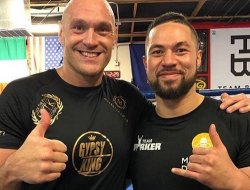 Former world heavyweight champion New Zealander Joseph Parker (30-2, 21 KOs) on the eve of the fight against Briton Joe Joyce (14-0, 13 KOs), which will take place in a couple of hours in Manchester, spoke about the help that Tyson provided him Fury is the reigning champion and longtime sparring partner turned true friend.

“He is just a source of positivity when he trains with you, energizes and cheers those around him,” says Parker. – He provides us with his hall for use, as well as his house for living, moreover, for the whole team. So he really helped me get my career back to where it is now.”

“When he is around, he is never shy about giving advice and helping out,” Joseph continues. “If he sees something that he thinks can help you, he will never keep silent about it. I am very grateful to him for everything he has done for me and continues to do.”

By the way, Fury is already in the building. And it is obvious that he will not support a compatriot:

Watching with interest… @Tyson_Fury will have his full attention on the WBO No.1 The Juggernaut v @joeboxerparker later on.#joyceparker | Now | BT Sport Box Office pic.twitter.com/TajQmiRSxV