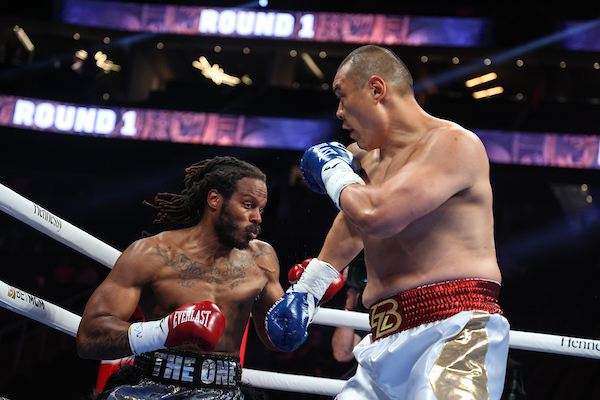 T-Mobile Arena, Las Vegas, USA. The 2008 Olympic medalist Chinese heavyweight (over 90.7 kg) Zhang Zhilei (24-0-1, 19 KOs) knocked out the late replacement in the person of the American gatekeeper
Scott Alexander (16-5-2, 8 KOs). It was the first early defeat of the underdog.

Left-hander Zhilei took the center of the ring, slowly prepared attacks, went behind Alexander’s front arm, drove him into the corner of the ring and to the ropes. Already in the starting round, the big man passed the left straight line, with which he cut down the American. It’s a knockout!

Zhilei Zhang is definitely a top 5 HEAVYWEIGHT and I would love to see him against Tyson fury , Wilder or Joshua pic.twitter.com/nuzvceKueG

Espino looked better in the opening rounds and even tested the strength of his opponent’s beard – he holds it well. Then he gave the initiative to Silva in the 3rd three-minute period, and in the 4th round he blundered a left hook, after which the Mexican rushed to finish off. The referee decided that Espino was missing too much.

It’s a BIG win for Aaron Silva who stops Espino in the fourth! #EspinoSilva #CaneloBivol pic.twitter.com/KZi72jPlks

Eddie Reynoso’s ward, Olympian Velasquez fought with an aggressive counter-puncher. He looked stylish at times, but often made rash decisions. For example, he stagnated at close range, losing to Soto in workrate, or he agreed to exchanges.

In one of them, in the 6th round, he shook the opponent with a left counter-hook, and then dropped it. He got to his feet, but the referee decided to stop the fight.

Some exchange! AND IT’S OVER!