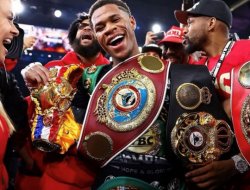 Former world champion in two weights, Italian-American Paul Malignaggi is sure that the undisputed lightweight champion Devin Haney (29-0, 15 KOs) from the USA will do everything to avoid a fight with Ukrainian veteran Vasily Lomachenko (16-2, 11 KOs) .

“I immediately said that Haney would not fight Lomachenko,”
He speaks expert. “That’s why he decided to beat George Kambosos again – it’s a trifling matter. And now he will simply vacate the titles and rise to super lightweight. Understand that in Top Rank everything was planned as planned: Haney takes all the titles from Kambosos, and then concedes them to Lomachenko. Then Vassily makes a defense or two, holding the belts until their young star Shakur Stevenson retires the aging star.”

“This is the reason Haney avoids Lomachenko. He understands this, says Malignaggi. – Bob Arum has even announced the fight between Haney and Lomachenko. And what happened? Devin is silent. I tell you, he will run away from Lomachenko at 63.5 kg so as not to lose all the belts. But Lomachenko is different. He has fought all the tops and is still looking for the toughest fights. He does not avoid anyone, does not choose convenient opponents. What if Devin does run away? I would then like to see him fight Teofimo Lopez. After all, this will be his last fight under a contract with Top Rank. But if Devin agrees to a new deal, he will find an easier opponent. Then they will give him a fight where he will have more chances to win.”

“If Haney does not sign a new contract, then in Top Rank take care – they will make sure that he is beaten. Promoters do this all the time. If you refuse a new contract, you are offered a fight in which you will be beaten. Yes, I would bet that Lopez will beat Haney. And I would like to see it. This is a good fight. I do not agree that Haney vs Lomachenko is a competitive fight. Vasily would have dominated this fight. He’s too versatile. He has too many tricks in his arsenal. Yes, Haney is bigger. But I don’t see how this will help him cope with all these angles of attack and combinations, ”the ex-champion argues.

“I’m sure Haney understands that too. That’s why he doesn’t want this fight,” the expert continued. What’s next for the belts? One or two will take Lomachenko. One or two will go to Stevenson. I think then they will meet in a PPV duel. But only when both are champions. That’s when Stevenson will defeat Lomachenko and become the new superstar. Next generation superstar. This fight will be held when Lomachenko starts to surrender. And Shakur is just now reaching his peak. A task Top Rank now retain all of Haney’s titles. That’s why they want him to fight Lomachenko. They do not need you to win all the belts with their help, and then go to another promoter with titles. They knew right away that Haney’s last contract fight was with Lomachenko.”

And here is what we think about this situation: Haney after Kambosos and Kambosos after Haney: all the most likely rivals.