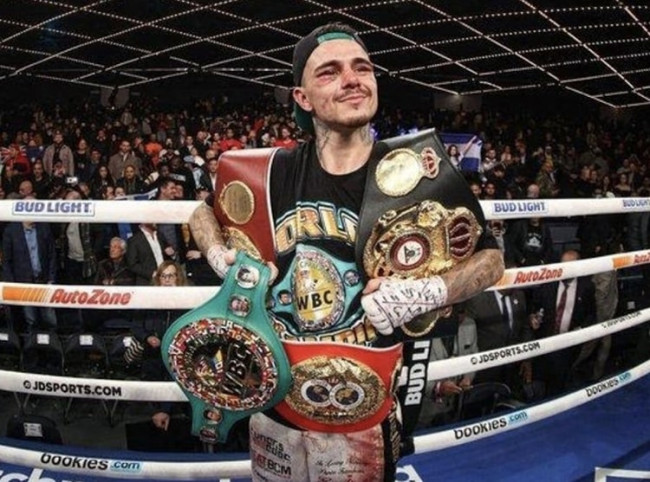 So far, the Australian Kambosos is the undisputed world champion de facto, but not de jure – thanks to Mauricio Suleiman and the WBC, who invented the fifth wheel (WBC Franchise belt) and caused unnecessary confusion. Kambosos is the WBC franchise champion, American Haney is the holder of the regular WBC title. And the Australian also has all the other division belts in his hands, which he took away from Teofimo Lopez from the USA.

On the eve of the fight, Kambosos shared a video with subscribers, in which he flaunts remarkable speed.

Haney not impressed opponent’s skills, confident in his superiority: “Victory in any case will be ours. Just because I’m better. He simply has nothing to oppose me. I will prove it in action. I want not just to beat him, but to beat him well and even shake him. The speed of Kambosos? Listen, anyone will look cool on their paws or on a sack. But all this vaunted speed evaporates somewhere when Devin Haney is in front of you.

“Speed ​​is not about having a coach tell you what combinations to throw. Speed ​​is not on the bag and not on the paws, because they do not fight back. I tell you, when Devin Haney is opposite, then you have a completely different compote. So I don’t care how fast it is. Timing beats speed. The feature of Kambosos is that he is only good when he holds his left hand low. No, it’s not for nothing that he keeps her so low. Yes, I already studied it. And I use it all in the ring. This is what distinguishes real champions from one-day ones. Real ones know how to adapt to rivals, ”said Haney.

The American is sure that this is his main advantage, because “in a duel, everything rarely goes as you planned. You need to be able to make changes in the course of the battle. Here’s how it works. It often happens that your plan for a fight does not work at all. It happened to me too, but I always found ways to get my way.”

Yesterday Kambosos made a prediction for the Alvarez-Bivol fight. But according to Mayweather, Haney can’t beat George in Australia.