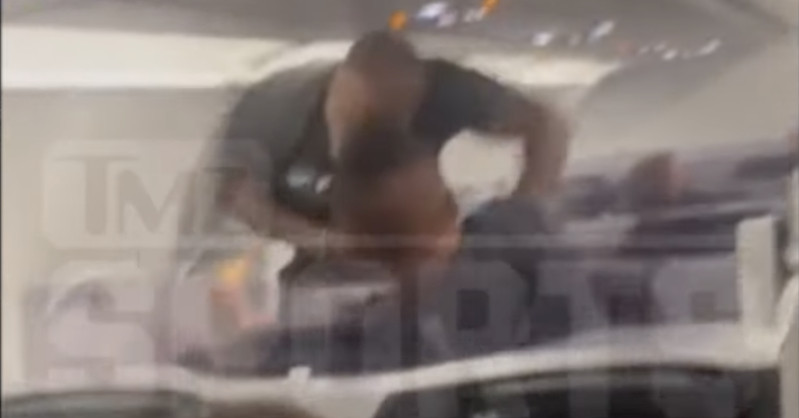 Rule No. 1 in life should generally be to not provoke Mike Tyson.

Video emerged Thursday via TMZ of the legendary boxing champion blasting a passenger with punches on a flight bound from San Fransisco to Florida. According to reports, Tyson was friendly with passengers until the man sitting behind him refused to stop bothering him. After reportedly asking the man to calm down — and that request being denied — Tyson exploded and delivered a barrage of punches before exiting the plane.

The bloodied passenger left the plane shortly afterward and was treated for medical attention before speaking to police. At the time of this writing, no charges have been filed in relation to the incident and Tyson has not been arrested.

Not surprisingly, the combat sports world had plenty to say about the entire situation. Check out reaction from fighters below.

Video: Mike Tyson blasts plane passenger with punches after altercation on a flight

Drunk, annoying and rude.
Pls don’t be like this guy folks.
I’ve been around Mike and he’s an extremely calm person these days.
This guy must’ve really brought it out of him. https://t.co/WHrKjswBUF

Just a light thrashing for being an absolutely disrespectful & annoying prick. Tyson could have really hurt him bad if he had intended to.

But hopefully this guy will rethink how he acts to others & in public. In my opinion, this is the simplest & best outcome.

I wonder if anything will happen to Mike for that plane incident. Hope not

Don’t matter how many mushrooms…how much weed…how much DMT….Mike is still Mike. Buddy should’ve just taken a nap on his own https://t.co/MtKkVNwsLX

This is what happens when you exude white fragility on the wrong on. #miketyson https://t.co/qUjqI7rBHB

Oh really? In what world do you live? Im not condoning & im not condemning. But I think you’ll find that’s EXACTLY how society “can” work and it might be a darn better place for it. Act a disregarding disrespectful fool & you “may” face a differing consequence than a stern word! https://t.co/RbHlsTs3eI

You cant Antagonize person especially a fighter and then get mad when you get a reaction. https://t.co/QhYPSxEQgr