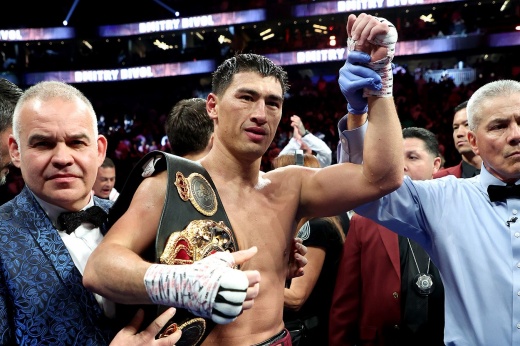 Legendary Kazakh veteran and unified middleweight champion (up to 72.6 kg) Gennady Golovkin (42-1-1, 37 KOs)
congratulated holder of the WBA Super light heavyweight belt (up to 79.4 kg) Russian Dmitry Bivol (20-0, 11 KOs) with a victory over Mexican star Saul Canelo Alvarez (57-2-2, 39 KOs): “Congratulations on your victory! Everything is clear! Keep it up!”

To the loser
addressed his former promoter Oscar De La Hoya (Golden Boy Promotions) and offered to resume cooperation: “It’s still (yet) too late to return to the best promoter.”

Recall that the parties broke up with the scandal – Canelo threatened to sue De La Hoya for 280 million USD.

Top welterweight prospect (up to 63.5 kg) Shokhzhakhon Ergashev (21-0, 19 KOs) made peace with promoter Dmitry Salita (Salita Promotions) and will perform May 26 in Dearborn, Michigan, USA as the opening act for heavyweights Otto Wallin and Rydell Booker. The opponent is the Argentine middle peasant Luis Alberto Veron (19-3-2, 9 KOs).

Promoter Ben Shalom (boxer) claims to be in talks with Bob Arum (Top Rank) about holding a fight for the WBO world middleweight title (up to 72.6 kg) between Zhanibek Alimkhanuly (11-0, 7 KOs) from Kazakhstan and Chris Eubank Jr. (32-2, 23 KOs) from Great Britain ( in the event that the current champion American Demetrius Endred will soon give up the belt).

Apparently, the promoters have no doubt that the Kazakhstani on May 21 will beat the Briton Danny Dignam and become the “interim” WBO champion. Nevertheless, Shalom does not rule out that Eubank’s next opponent will not be Alimkhanuly, but compatriot Liam Smith (31-3-1, 18 KOs).

The main fights of May in boxing: Canelo-Bivol, Charlo-Castagno 2, Kovalev’s comeback

The WBC heavyweight champion (over 90.7 kg) Briton Tyson Fury (32-0-1, 23 KOs) shared a funny video with his subscribers. The protagonist of the episode is the son of the big man Adonis. He slightly dumbfounded dad, saying that he “wants to be like Deontay Wilder.”

Wilder and Fury fought three face-to-face fights. The first ended in a draw, the second and third ended in early victories for the British. Here are our reports: #1, #2 and No. 3.

The WBC finally remembered about justice! Over the weekend in Canada, local slugger puncher Ryan Rozicki (15-1, 14 KOs) lost outright to Argentinean prospect Yamil Peralta (13-1, 6 KOs), but got a home win, and with it the WBC International title. The organization made the belt vacant and demanded an immediate rematch.

The promoters of the “winner” were already staring at the title with might and main, and the slugger himself turned out to be a very cool and honest dude – he promised the “loser” revenge, paid tribute to the performance. Later he wrote on social networks: “I take my hat off to Peralta. He outboxed me almost from the start to the final gong, but I got a “home decision”. Congratulations dude. You are one of the best in this weight. It was an honor for me to share the ring with you.”

Rozicki fought for the WBC title not so long ago – he rolled a bright slugfest, but lost by decision of the judges. Read more here about that historic event.