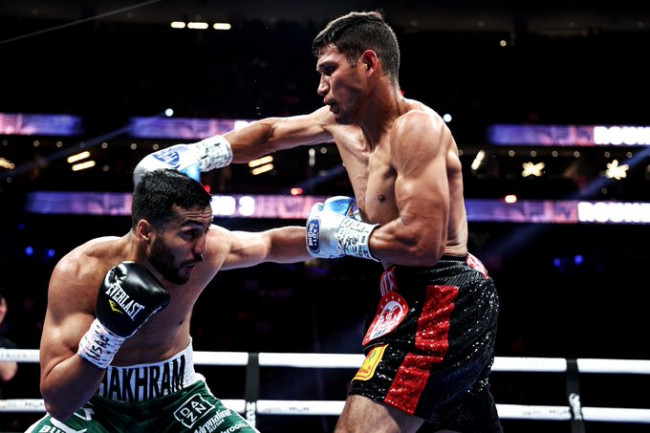 The starting round was held in exploration. Giyasov set a comfortable distance and smashed his opponent’s nose with a jab. He looked closely, tried to calculate the favorite, but did not keep up. So far, Gomez has nothing to offer the prospect. The Mexican earned a little more active and marked himself with two left hooks delivered to the target, also leaving traces on the opponent’s face.

In the 4th round, Giyasov dropped Gomez with a left counterhook, after which he recklessly ran to finish off. The Mexican fought back. In the next three minutes, the exchange in the last seconds was no longer in favor of the favorite.

In the 7th round, Giyasov again seated the opponent on the canvas (an uppercut passed), but in the last seconds the favorite was already hiding in the clinch after he blundered Gomez’s blow, and then almost without a fight gave the underdog the next three minutes. In the 10th round, the favorite recorded knockdown No. 3 in his piggy bank, and then decided to run back to the gong.

Castro spent the opening round in attacks, but, as in the previous fight, he missed a lot. Prospect often reached for blows, smeared a lot, could not find his rhythm and distance in any way. The favorite did not invest in strikes, he traditionally tried to bet on workrate, but lacked efficiency.

The score of the judges: three times 60-54. Not impressed. Again. And this is one of America’s top talents.