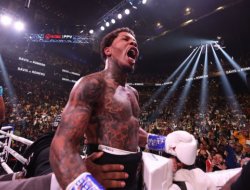 American WBA World lightweight champion Gervonta Davis (27-0, 25 KOs) recently wrote on social networks that he is no longer a client Mayweather Promotions – the promotional company of Floyd Mayweather and Leonard Ellerbee. A little later, the fighter deleted the message. However, he does this very often.

Opinion on this matter
shared promoter Eddie Hearn from a rival company Matchroom Boxing: “There are several points at once. First moment. It looks a lot like “Tank” Davis has fights scheduled for the near future: first he will enter the ring in January, then he has a duel with Ryan Garcia. Second. All these insiders… It seems to me that journalists need to be more careful with them. Especially if they receive a message from an unknown number.

“Does this mean that the news about Davis’ contract is false? I don’t think. After all, I saw what I saw – a deleted message. And he has done this before. It looks like he really doesn’t work with Mayweather and Ellerbee anymore. But this does not mean that media representatives need to publish news received from an unknown source. In this particular case, I think that Davis did enough to show people that he is no longer under contract with Mayweather Promotions. And although I don’t believe the rumors, I believe that if he first writes something and then deletes it, there are reasons for that, ”Hearn shared his conclusion.

“I agree that all this is none of my business,” the boss smiles. Matchroom Boxing. – But when you ask me if I want to sign Gervonta, my answer is obvious – of course, yes. But it looks like his immediate plans are booked. So let’s see what happens next. If they really broke up, then I believe that Leonard will be very hurt. But it happens. Contracts expire, fighters leave. This is boxing. This is business. I’m sure they will stay in the game along with Floyd, but there will be no limit to their disappointment, because they were an important part of the journey that Gervont went through.

Do you think an upset is possible in the Davis-Garcia fight? Expert opinion. Meanwhile, the former absolute champion shared his analysis and forecast.