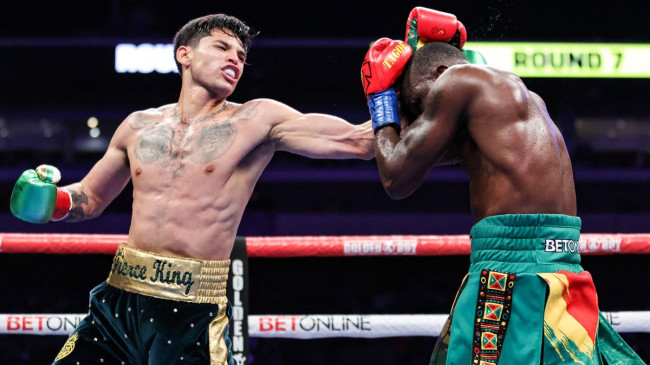 Top lightweight contender American Ryan Garcia (22-0, 18 KOs) reacted to the decision of the WBC to sanction an eliminator fight with Mexican Isaac Cruz (23-2-1, 16 KOs) – a fight with the winner of the fight for all division belts between George is at stake Kambosos Jr. from Australia and Devin Haney from the USA.

“I hope we can speed up this whole process,”
Garcia said. – I propose to immediately abandon the negotiations and meet at the promotional auction. I know that this is exactly the tactic my team will have. So let’s see. I really want us to quickly resolve all these business matters. I want to fight him on July 16 at Staples Center (now Crypto.com Arena in Los Angeles, USA). So the faster we get it all done, the higher the chances that we’ll be able to make this really big event in LA. That is why I want everything to be resolved quickly.”

Interestingly, in the case of bidding, the distribution of the prize fund will be in the ratio of 50/50.

Then Garcia suffered a little: “Yes, I’m kapets delighted. After all, this fight has what I need – a lot of hype. You know that many fans believe that this dude can somehow beat me. And that’s what turns me on. It also turns me on that this fight is now officially sanctioned. And the dude has nowhere else to go, nowhere else to hide. No, I’m not saying he’s definitely pissed. I say that this way the fight is much more likely to take place. And I have a much better chance of doing it in LA. The whole city will rage! Oh, it’s going to be a fucking huge event. Dude, I suppose you already feel it? Aaaah, I’m fucking turned on!”

Next, Garcia tried to predict the course of the fight. Everything turned out easier than a steamed turnip: “What do we know about him? He always pushes forward. And I have an advantage in arm length and height. And I will use my superiority. So he doesn’t shine. This is not an assumption. It is a fact! This is reality. He will have to get closer. And he can’t outbox me. It’s not his style. He will be the usual “Pitbull” Cruz – rush to the attack. And this already gives me the opportunity to show all my best sides – I will catch him and punish him. I know that with a high degree of probability I will knock out the dude. I know that he has almost no chance to last as long as my previous opponent.

Garcia tried to give Cruz credit. It turned out so-so: “He, of course, will try to win. But I also want the same. I’m happy that there will be a dude opposite who just as eager to win, and not stupidly trying to survive. I am absolutely sure that I will beat him. I will not allow any underestimation. I know he will go all out. You know, the organizers called my previous fight “Return”. On this I disagree with them. That was a warm-up. So it was necessary to call that show – “Warm-up”. But this is the real “Return”.

In April, Cruz was offered $1 million to fight Ryan Garcia, but he gave a strange answer. A little later, he himself offered a fight: “Let’s fight.”