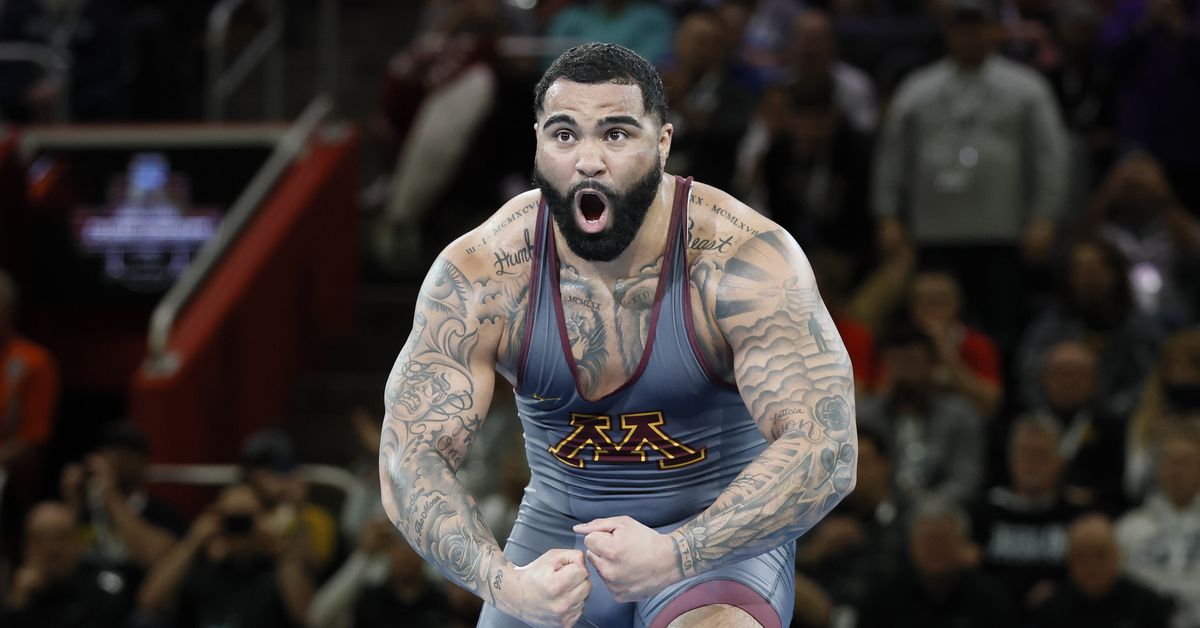 Gable Steveson officially retired from the sport of wrestling after wrapping up his second consecutive NCAA championship on Saturday night in Detroit.

His 6-2 victory over Arizona State’s Cohlton Schultz capped off a dominant run for the 21-year-old heavyweight from the University of Minnesota. After earning his win, Steveson celebrated with his high-flying signature flip through the air before removing his shoes and leaving them in the center of the mat, which signifies the end of his wrestling career.

“It’s done,” Steveson said on the ESPN broadcast about his retirement. “I was clear about what I wanted to accomplish. It was my goal to win an Olympic medal and win again at the national tournament. It is just bizarre. I don’t know how to describe it.”

No words can describe this moment.

Steveson was a heavy favorite to repeat as NCAA champion after completing a stunning run through the 2020 Olympic games, where he claimed the gold medal at 125kg. Steveson came from behind to win the final sequence at Tokyo. He defeated Geno Petriashvili of Georgia in the last seconds and became an Olympic champion.

Steveson received numerous offers to either return to pro wrestling, or to pursue a career in mixed martial arts. Ultimately, Steveson decided to go back to Minnesota to win another National Championship while also signing an NIL rights deal (name, image, and likeness) with World Wrestling Entertainment.

Steveson has made several appearances at WWE programming as he prepared to make his eventual move into pro wrestling.

Now that journey is complete, as Steveson is retiring from competition to focus on his new career with WWE, however wrestling will always have a special place in his heart and he even offered advice to the next generation of athletes who will take his place.

“Just maturing, physically and mentally, having good people around me,” Steveson said about his own career. A good support network is essential. It’s taken me to many places, you guys could see so many more.

“Just stay focused, stay grinding, keep a good friends group, young kids stay in school, have fun, train hard and love wrestling. If you do not love the sport , it will be difficult to get there.

One of the best to ever step on the mat. Thank you @GableSteveson for all you have done for the sport of wrestling. #NCAAWrestling pic.twitter.com/6K1XsdaSye

Former two division UFC champion Daniel Cormier called the matches from the ESPN commentary booth on Saturday and was sad to see Steveson leave wrestling behind, especially considering the potential he had to return for another Olympic run in 2024.

That said, Steveson obviously had his mind made up that Saturday would serve as his final match, with plans to now put his full focus on a future in WWE.

“A young man like Gable Steveson at the top, that speaks volumes about his special talent,” Cormier stated. It’s disappointing for me, a wrestler. I’m sad to hear he’s not coming back.

” I am grateful for all of the wonderful memories we share. Who will ever forget this? Who will forget his multiple takedowns with 15 seconds left to win the Olympic title?”

There’s no word when Steveson will make his debut with WWE, but many believe he will at least appear at WrestleMania 38, which is scheduled on April 2 and April 3 at AT&T Stadium in Arlington, Texas.