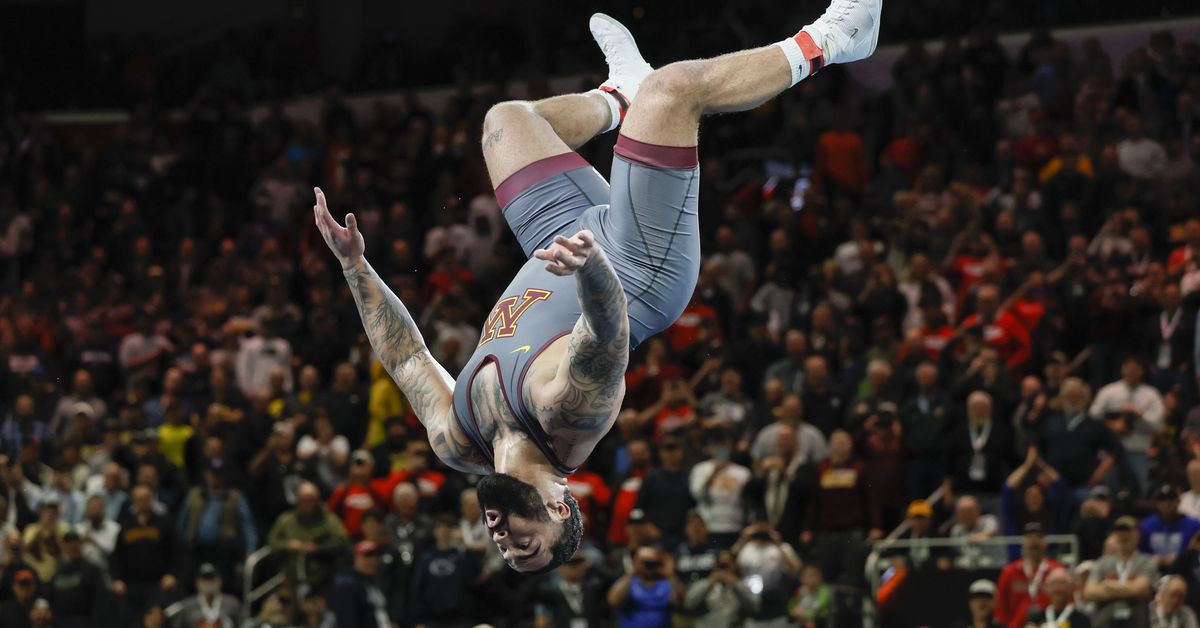 Gable Steveson left his shoes on the wrestling mat, but he still has one foot lingering in the door of competitive combat sports.

This past Saturday marked another milestone in Steveson’s storied amateur wrestling career as the heavyweight captured a second NCAA Division-I wrestling championship in dominant fashion, adding to his trophy case that also includes a gold medal from the 2020 Tokyo Olympics.

After his retirement, Steveson took off his wrestling shoes. The current plan is for the 21-year-old to enter professional wrestling after he signed an NIL deal with the WWE last September. He is open to the possibility of wearing the singlet again for real matches in the future.

“For now, I’m done,” Steveson said Wednesday on The MMA Hour. For now, I will be focusing on WWE. Go to Wrestlemania. Do all that stuff. But like I said, for now. I know that competitive itch is gonna come back, and who knows, it might be at the 2024 Olympic Trials when I show up again.

Until he officially signs a pro contract with the WWE, Steveson is actually eligible to return to the University of Minnesota for a fifth year after the 2019-2020 wrestling season was cancelled due to COVID-19. Steveson also stated that he will be allowed to participate in several other tournaments if he chooses to continue competing.

But with WrestleMania 38 just around the corner, and Steveson expected to make an appearance — he played coy when asked whether he would simply be in attendance or participating in an on-screen angle — his mind is fully locked in on succeeding as a pro wrestler.

Would WWE glory prevent Steveson from pursuing a career in fighting? Steveson had been approached by several major MMA promotions.

” There’s always a chance,” Steveson stated. “There’s a chance for a lot of things. It’s possible that I will step into the MMA ring. I like to challenge myself in all aspects and the Brock [Lesnar] route is what I plan to take right now.

” Learning from him is going to help me achieve my maximum potential. I believe that I have the chance to take on the role of an octagon fighter, and with the right training, I can be a really great wrestler. So I’m just gonna leave that chapter open, and maybe we’ll write it and maybe we won’t.”

Steveson added that he appreciates having the support of amateur wrestler-turned-UFC star Daniel Cormier, who told MMA Fighting on Monday that Steveson is guaranteed to be a world champion if he fought in the cage.

It will be some time before that possibility presents itself to Steveson again, and it sounds like that’s another itch he plans to scratch eventually.

“I’m that guy that’s gotta do it,” Steveson said. “Even though I didn’t want to come back to collegiate wrestling this year, I felt like I had to. And WWE, I’m doing it, I’m gonna go out there and do my best and I’m gonna put my 100 percent in that. Then, when it’s over, is there any time I can fight? If things are going well I’d love to be able to help.