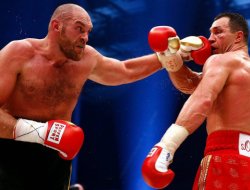 In 2015, British heavyweight Tyson Fury (32-0-1, 23 KOs) did the impossible – he threw the long-playing heavyweight hegemon Ukrainian Vladimir Klitschko off the throne. According to the winner, that victory almost became the beginning of his end.

“Do you know what I think? To be honest, that was the most shitty night of my life – all of a sudden
opened up Fury. Yes, that’s exactly what I mean. Worst night ever. It was like a curse. It’s been almost 7 shitty years since then. That is, that fight divided my life into “before” and “after”. Fantastic 27 years before the fight and a mediocre 7 years after. Yes, the victory over Klitschko turned out to be a curse for me.

“I see that you don’t understand me…” explains the champion. “It seems to you that I got everything that I dreamed of that night. But the truth is, I never wanted all that fame and all that shit that comes with being a champion. I did everything not for this. I was only interested in the victory over Klitschko itself. Just beat the invincible. Nothing else. I wasn’t prepared for what happened next. I couldn’t live my old life, I couldn’t go anywhere. I felt like my life was now controlled by someone else. Not me… Believe me, there is nothing cool about it. This is fucked up! It sucks!”

According to Fury, he “didn’t realize it all before the fight. Didn’t understand what he was getting into. That’s why I say that I didn’t want all this. I didn’t want this life. It was as if I was stuck in constant torment, because I was recognized wherever I went … ”

On Saturday, Fury will defend the WBC belt against compatriot Derek Chisora ​​- keep our forecast and bets on this fight.

It is possible that immediately after it a fight for the title of absolute world champion with the holder of the remaining belts of the division, Ukrainian Oleksandr Usyk, will be announced. Yesterday manager Egis Klimas said: “We’re not flying to London to watch the fight.”