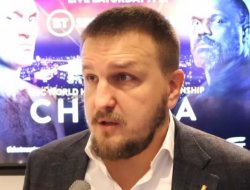 In a conversation, the functionary commented on the information that the WBC champion Briton Tyson Fury (32-0-1, 23 KOs) refused a fee of 65 million for the fight for the title of absolute champion against Usyk. The promoter explained how things are going with the organization of the main fight of the division from his point of view.

– I saw some comments by Tyson Fury, according to which he refused $ 65 million for the fight with Oleksandr Usyk. Is there any truth in this?

– It’s a strange thing. But it’s normal to hear strange things from Tyson Fury, who retired from boxing 5 or 6 times in the last six months, came back 6 or 7 times. When we read his plans: fight Anthony Joshua next, then Usyk next, then retire again, then Joyce, Dubois. It’s a random thought generator.

— I respect him. It’s not like I’m being disrespectful. But it’s funny. He is a funny person. He comes to social networks to amuse people. It kind of lets people hear what they want to hear. Someone wants to hear that he fights Joe Joyce – here you go. Satisfied. Dubois are satisfied. Mustache – satisfied. He wants to satisfy everyone here, but in the end, this is the biggest fight of his career. This is probably the biggest heavyweight fight in history. In the era of four belts, there was never an undisputed heavyweight champion. So this is a story in the making. It’s all for fame, it’s all for heritage. You can’t justify yourself for the reason that “I don’t want to fight Usyk because he’s a middleweight.” It’s disrespectful to Tyson Fury.

– How confident are you that this fight will take place next, provided that Tyson passes (Chisoru). What happens if Derek wins? Will the offer still stand?

– If Derek wins, then it will be plan B. Usually people expect Fury to win. If he wins, we’re all on board. We have Queensberry, we have K2, we have Usyk’s team, Usyk himself, we have our partners from Saudi Arabia ready to take the fight. So there’s only one person waiting, and that’s the tall gypsy. We need to hear his answer. If he’s not afraid to lose his title, if he’s not afraid to face Usyk, if he’s not afraid to just be a man and get in the ring against a better, more experienced fighter than him, then we’re going to have a big fight. He can win. This is boxing. He’s taller, he’s stronger, he’s anything, but he shouldn’t be afraid of Usyk. This is what we want it to be.

“I think he avoided him before. Once again, this should not be taken as a disrespectful comment. It is a fact. Last year he had a chance to fight for the title of absolute champion. Dillian Whyte agreed to step aside, Anthony Joshua, who had the right to an immediate rematch with Usyk, agreed to step aside, our partners in the Middle East agreed to host the fight. Then there was the only thing that was in question – it was Tyson’s desire to take the fight. And he didn’t agree. That’s where the problem was.

“So last year everything was ready. All he had to do was accept…

– … and he did not accept. Commenting on these 65 million figures is all bullshit. The only reason this fight has shifted from December is because Usyk’s rematch with Joshua was originally scheduled for July 21st. He was pushed back by a month and we had to push back the next fight by a month because Usyk had a plan to recover and get back to training. Shifting by a month, we got January – not a very good month for a big fight. That’s why we moved it to February. So there are no conspiracies here, it’s very simple, it’s very transparent, and Usyk never once said a word that he wants to avoid this fight. But we heard a lot of that from Tyson.