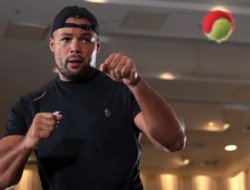 The big man talked about who it would be more convenient for him to box with – with the WBC champion compatriot Tyson Fury (32-0-1, 23 KOs) or with the owner of the rest of the division belts Ukrainian Oleksandr Usyk (20-0, 13 KOs).

“Perhaps I don’t care,
I decided Joyce’s dilemma. – I will agree to fight regardless of the name of the opponent. After all, both Usyk and Fury are top-level fighters. And each of them is a very difficult task, although they are absolutely different stylistically. Whoever I can get to first, I will fight with. Especially since they are the best in the division. So what’s the difference?

The WBO decided that by the end of the year, Fury and Usyk will determine the absolute. For this reason, the organization put their “interim” title on the line for Joyce vs. Parker.

On the upcoming fight with Parker: “Very important fight for both. Therefore, the fight will be great. Heard that Joe had a great training camp that he did at the Fury Gym. They say they sparred and Tyson told Parker all about me. Well… Let’s see what he learned. He says he’ll be the first one to give me an early profiring. Let him try. But I warn you, I have a few more tricks up my sleeve.”

Yesterday, David Haye talked about this fight: “There is a fight with Usyk ahead.” And Parker recalled that “Joyce has already been knocked out before.”