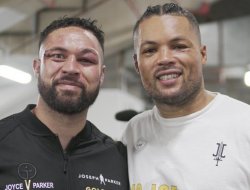 Usyk be afraid – a report about this event

The winner expects to fight for the title in the next fight. He was asked about his preferences – a fight with compatriot Tyson Fury (32-0-1, 23 KOs) for the WBC title or with Ukrainian Oleksandr Usyk (20-0, 13 KOs) for all other division belts. The thing is that Joyce and Fury are on the same team – queensberry promotions Frank Warren.

“Ready to fight Fury. No problem at all –
He speaks Joyce. — But still I hope that Usyk will be next. Mustache, buddy, let’s fight! I’m here! Juggernaut is here baby! (laughs). Usyk’s message? I think that enough talk, it’s time to act. I know that he has an injury, so I wish you a speedy recovery.”

On Mahache with Parker: “Words cannot express how happy I am. I passed and am satisfied with my performance. I think I need to review the fight first before commenting in detail. Parker? Damn, that’s a cool dude. I beat him this way and that, inflicted a cut, I thought maybe the referee would stop the fight … But he continued to respond with blows for blows. Respect, man!”