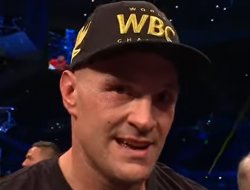 The fight between Tyson Fury and Oleksandr Usyk for the undisputed heavyweight title may take place later than expected.

In a post-match interview, Tyson said that he had injured his hand and – perhaps – now he will have to undergo surgery on his elbow.

“I was kind of thumping my hands on Derek’s big head. She is as strong as a brick,” Fury stated. – And he also had problems with his elbow. Probably have to give the right elbow under the surgeon’s knife. After the third fight with Wilder in October 2021, I had an injury to my left elbow. It will take six to eight weeks to recover. Basically, I have to deal with it.”

According to the Briton, as soon as the doctors allow, he will return to the gym and will be “ready to enter the ring in March-April.”

However, the injury did not stop Fury from yelling at Usyk in London – a video of the meeting face to face.