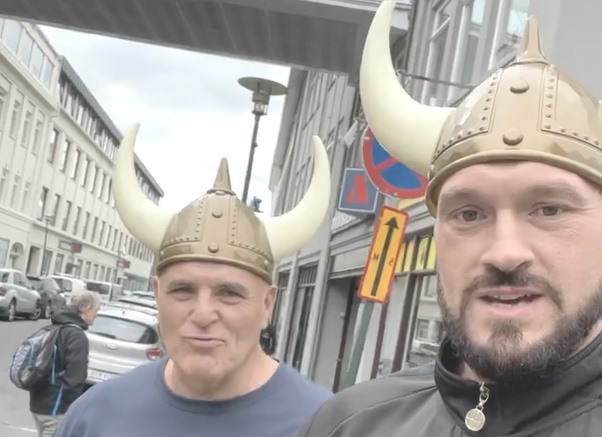 WBC heavyweight champion Tyson Fury (32-0-1, 23 KOs) flew to Iceland with his father John to promote a little potential fair fight against local kingpin Hafthor “Mountains” Bjornsson, but, not finding him in the country, announced that they had captured her and went to the bar for a drink.

In the morning, Fury posted a clip to stories in which he announced his arrival at the Reykjavik airport: “Do you know where we guys are? Iceland. And what are we doing here? We’re looking for Thor. Come out and fight like a man!”

A little later, Fury recorded a video near the hall of Hafthor, and there he learned that the opponent was abroad.

Fury spotted in the hall: evaluate the speed of the hands – video

“Thor, if you want to go crazy with the Gypsy King, you have to come to Morkham and find me,” Tyson said. Then he and his father bought souvenir Viking horned helmets and walked the streets in them, claiming to have “taken over” the country.

It all ended prosaically: in a pub.

Tyson Fury and John Fury have flown to Iceland on a whim to try and provoke a face-to-face confrontation with Hafthor Bjornsson today, only to find he’s not there so they’ve gone to the pub instead…

The famous powerlifter replied to him in his Instagram video: “I’m in Rome on the set right now. Fury tried to find me in Iceland, but he couldn’t because I wasn’t there. Tyson, if your team is serious, if you are serious about fighting me, then send me the contract. Let’s get serious, ”the jock replied very pale when compared with Tyson’s visit.

In March, Bjornsson defeated strongman Eddie “The Beast” Hall on points. Also in the spring, Fury knocked out Dillian Whyte and announced that he had finished his career. But he did not refuse the WBC belt. And recently he already announced that he was ready to return, naming the opponent and the conditions.