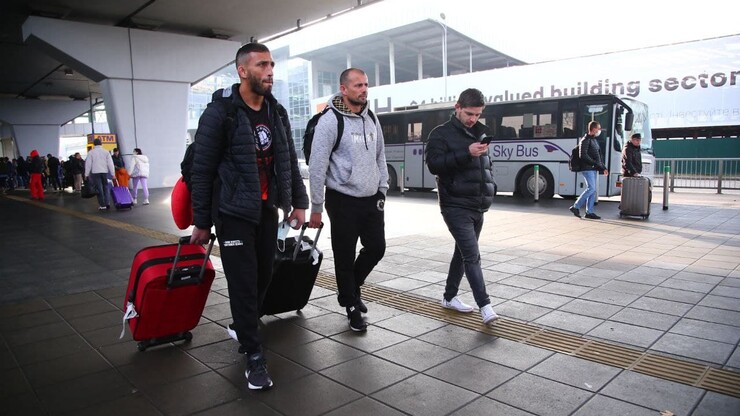 Participant of the show from B1 MMA – about the fight on November 6, career and the Klitschko brothers

An experienced Brazilian MMA fighter, ex-UFC participant Markus Vinicius (24-11-1) on November 6 in Kiev in the Mad Cage show from B1 MMA will fight with Ukrainian Alexander Gorshechnik (16-5).

Upon arrival in Ukraine, the athlete in an interview to our website spoke about the long flight from Brazil, shared his opinion about the opponent, and also praised Oleksandr Zinchenko, who “makes noise” at Manchester City.

– Marcus, how did you get there? You must have had a long flight…

– Yes, to be honest, we were very tired, because we flew for about 20 hours. We flew from Brazil to Qatar, where we had a few-hour transfer, after which we went to Ukraine. It’s not easy physically, but it won’t affect my mood in the fight.

There is still time before the fight, I will have a good rest, recover and be full of strength. In addition, flights and travel for an athlete are a common thing.

– Wouldn’t the fact that you arrived at the fight just two days before it still play a disadvantage for you?

– It would definitely be better to come here a week in advance, or even earlier, but this is not a problem for us, because if we have already agreed to this fight, then we will do everything in our power to win.

– What can you say about your opponent – Alexander Gorshechnik?

– The potter is an excellent athlete, he has a lot of experience. I saw several of his fights, he always gives himself to the fullest, he goes forward, it’s hard to break him mentally. However, this is not the first time for me to meet such serious guys, I can at least remember my fights in the UFC, there were also very difficult opponents.

I flew to Ukraine just to win and I’m going to prove it on November 6th.

What does this fight mean for your career?

– This is a good chance to return to active performances. I haven’t been in the cage for a long time, but I don’t consider this a minus for myself, rather the opposite – I really want to feel the taste of victory again.

I promise that the fans will see a bright confrontation, and it will definitely not be easy for Alexander. I have something in reserve that he definitely doesn’t expect.

– Can you remember your experience in the UFC? What was it like and what did you take from these performances?

– Yes, at one time I got a chance to compete in the coolest MMA promotion in the world and took advantage of it. The result I got there was not very positive – I won only one fight, however, at the same time, I gained a lot of experience, which I used in the future.

The UFC is an incredible structure that has given all fighters the faith and the chance to shine. It will be cool for Ukrainian guys if B1 MMA can show itself as well. I believe they will succeed.

– What do you know about Ukraine? What have you heard about our athletes?

– I know your country for sporting achievements. Of course, I heard about the Klitschko brothers, Andriy Shevchenko, Oleksandr Usyk. Now your boyfriend Oleksandr Zinchenko is playing at Manchester City, he is making a fuss with our Brazilians.

I also know about Elina Svitolina, she is a very cool tennis player. In general, you have good achievements in sports, and I am glad that I will compete in Ukraine.

Watch the broadcast of the tournament from B1 MMA on Saturday at 18:00 on Megogo.

Lopez is in touch with God. Teofimo told what he found himself in