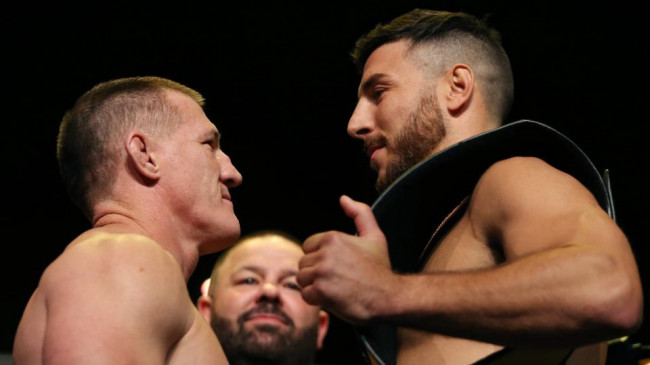 Newcastle Entertainment Centre, Newcastle, Australia. In the main event of the show, the ex-football player
Paul Gallen (12-2-1, 7 KOs) gave the fight, but lost to the Australian heavyweight champion (over 90.7 kg)
Chris Terzievsky (11-1-1, 8 KOs).

Everything is simple here. The 40-year-old Gallen needed a fight, and the much younger Terzievsky needed to work from a long distance, go on his feet and box calmly. The champion coped with the task very well, and in which case he knitted an opponent in the clinch.

Veteranishche worked on spurts, as there was not enough functionality to run sweeping swings and hooks for a long time. In the 3rd round, he even tried to actively press the opponent, but he did not succeed in this either. However, his rare accurate shots really bothered the visually fragile southpaw Terzievsky.

Towards the equator, the fight turned into a one-sided beating. Gallen threw fewer and fewer blows, almost never delivered them to the target. Terzievsky deftly left on his feet, confusing the angles of attack, often fouled. In the 7th round, he received a penalty from the referee. Then it turned out that he was seriously tired and slowed down. Gallen felt this and found additional strength in himself – he rushed to the attack.

The champion is ahead with a huge advantage in the score, but he is so tired that he can hardly stand on his feet. In the 9th round, Terzievsky missed a catastrophic lot, but did not fall. His tape hangs down to the canvas, but the referee does not want to interfere in the course of the fight, as for Gallen this is the moment of truth. No, I didn’t.

Final round. Champion frankly cycling. The challenger is too slow and heavy on his feet – not to keep up. The score of the judges: three times 97-92.

Terzievsky UD 10. Everything is honest, but a little sorry for my grandfather – he was close.

As part of the show, the IBF Inter-Continental and WBO Oriental champion titles in the second bantamweight (up to 55.3 kg) were played by an Australian
Sam Goodman (11-0, 6 KOs) and
Fumiya Fuse (11-2, 1 KO) from Japan.

The left-handed guest started the fight well, countered with a cross and scored a knockdown. Goodman got to his feet and seized the initiative even towards the equator, offering a power confrontation in infighting, in which he simply reworked the guest.

The score of the judges: three times 98-91 in favor of the local favorite.

An interesting confrontation took place in the light weight limit (up to 61.2 kg): a popular local fighter Francis Chua (8-3-1, 3 KOs) gave the fight, but still lost to a fighter from the top 15 IBF and WBO ratings to the Japanese Hironori Mishiro (12-0-1, 4 KOs).

An interesting moment: the confrontation was 7-round, and the judges disagreed.

Bronze medalist at the Olympics-2020 local lightweight (up to 61.2 kg)
Harry Garside (3-0, 2 KOs) made his debut defense of the title of champion of Australia, having dealt with a certain
Layton McFerran (5-2, 2 KOs).

Southpaw Garside shuttled beautifully, failed his opponent, countered. It seemed that the fight would go the whole distance, but immediately after the equator, the favorite sharply increased the density of the fight, turning the fight into a one-sided beating.