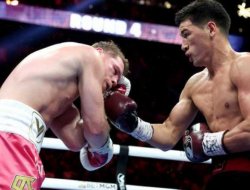 Promoter Eddie HearnMatchroom Boxing) lures Russian light heavyweight champion Dmitry Bivol (21-0, 11 KOs) into the second middleweight – it is in him that he offers to rematch with the Mexican Saul Alvarez (58-2-2, 39 KOs).

According to Hearn, it’s a matter of legacy for Bivol, as “Dmitri will get the chance to become the undisputed world champion. I know Canelo prefers to fight at light heavyweight. But I also remember Bivol’s words that in boxing he is primarily interested in titles and heritage, and not in money. He himself says that he can do 76.2 kg.”

Undisputed super middleweight champion Canelo last May unsuccessfully tried to take the WBA light heavyweight belt from Bivol. After the defeat, the Mexican complained of an injured hand, and at the end of the year he even underwent surgery. He insisted that a revenge clause be written in the contract, and he wants to have a revenge with the Russian in September.

At the end of December, Bivol said: “I know that Beterbiev also wants to fight me.” The Russian commented on the rematch with Canelo: “I don’t want to depend on his decision.”