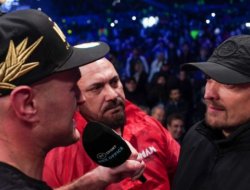 Former WBC belt holder American heavyweight knockout Deontay Wilder (43-2-1, 42 KOs) surprised his colleagues in the division with the forecast for the fight – the current champions Tyson Fury (33-0-1, 24 KOs) from Britain and Alexander Usyk (20 -0, 13 KOs) from Ukraine will determine the absolute world champion.

wilder honestly
confessedthat does not see a favorite in this confrontation: “Who will win? I dont know. I think the chances are 50/50. It all depends on which of them will cheat more. That’s all. Do you know how it happens? Someone will enter the ring wearing gloves that are not approved by the commission. Someone will have pocket judges … “

Wilder met Fury three times. He drew the first match, lost ahead of schedule in the 2nd and 3rd. After the second fight, the American said that his opponent cheated with gloves.

Usyk and Fury’s teams are still negotiating. Promoter Bob Arum (Top Rank) said that Alexander has already accepted the offer of the Saudis, it’s up to Tyson. Later, a disturbing post by a Ukrainian appeared.