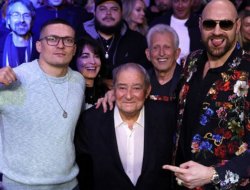 However, Fischer
gives back tribute to the Ukrainian: “As for me, Fury will win. He is stronger physically and is not inferior in boxing IQ. It has also been tested in real battles. He went to war three times with Deontay Wilder. I just think that “resolves” his advantage in weight and anthropometry. He knows how to use it. He will pat Usyk a little, like he is a rag doll. But this is definitely not some kind of underestimation of Usyk. After all, he has long proved that he is a world-class fighter.”

It was previously assumed that Usyk and Fury would fight in early April. But the other day the promoter of the British admitted that this fight will take place a little later.

Do you think Fury can disrupt the fight with Usyk? Meanwhile, Hearn explained what it would look like.