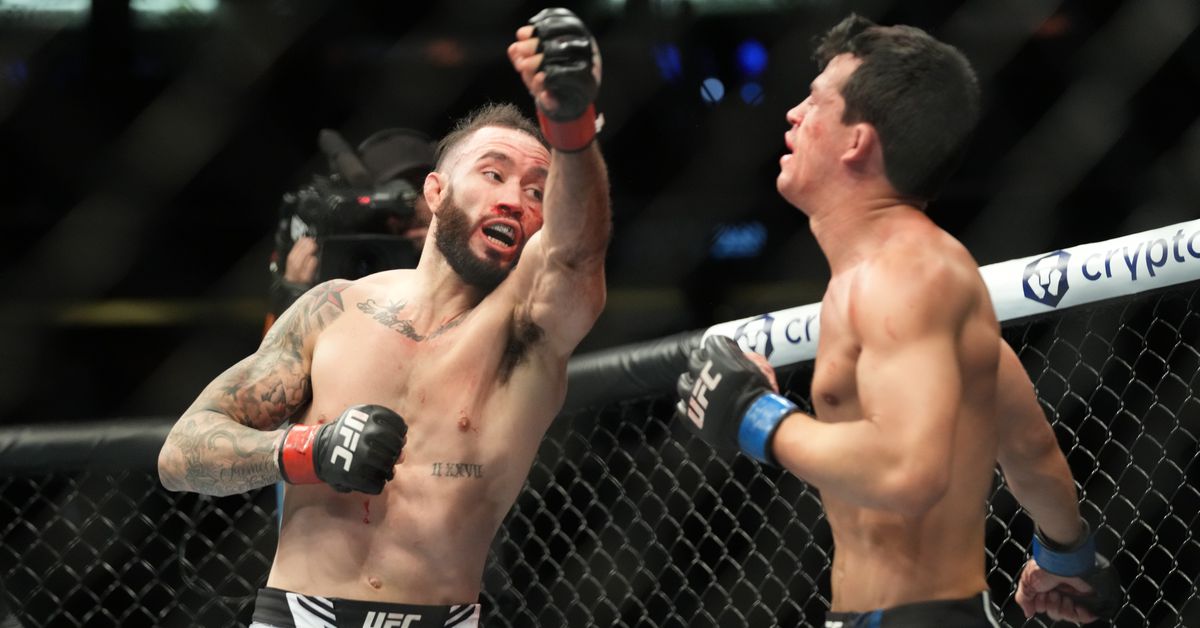 Fights come together fast these days, and if you blink, you can easily miss them. Fight Roundup brings you the most recent matchups so you’re always up-to-date with the latest news.

All bouts featured have been officially announced or confirmed with MMA Fighting’s Mike Heck and Damon Martin via sources with knowledge of the matchups.

Shane Burgos (14-3) and Charles Jourdain (13-4-1) officially have a date for their highly anticipated featherweight clash.

The striking specialists will fight at UFC on ABC 3 on July 16 at UBS Arena in Elmont, N.Y. They were previously rumored to be fighting at UFC 276 on July 2, but MMA Fighting confirmed with a source that the bout was still in the works. Eurosport was first to report the new date.

Burgos recently stopped a two-fight losing streak with a thrilling unanimous decision win over Billy Quarantillo at UFC 268 this past November. The New York native makes his 11th UFC appearance and has gone 7-3 for the promotion so far.

Jourdain is currently on a two-fight win streak and is unbeaten in four of his past five bouts. He recently submitted Lando Vannata inside of a round at UFC Vegas 52 in April and earned a unanimous decision over Andre Ewell in December.

More than three years after her last bare-knuckle bout, Rawlings (3-0 bare-knuckle boxing) is slated to face Britain Hart (4-3) in a rematch on June 24 at BKFC 26 in Hollywood, Fla.

Rawlings and Hart previously collided in August 2018 at BKFC 2, with Rawlings winning a split decision.

Rawlings won her most recent combat sports appearance with a unanimous decision over Elina Kallionidou at Bellator 240 in February 2020. Hart recently saw her four-fight win streak in bare-knuckle boxing snapped with a decision loss to Christine Ferea in February.

Ducote (11-6) is set to make her UFC debut at the July 16 New York event when she faces veteran Jessica Penne (14-5) in a strawweight bout. Penne was originally scheduled to fight Brianna Fortino, but Fortino was forced to withdraw due to an injury suffered in training. The new bout was first reported by MMA Junkie.

This is Ducote’s second fight of 2022 following a second-round doctor stoppage of Alesha Zappitella at Invicta FC 47 in May. That was the first successful 115-pound title defense for Ducote, who won a vacant belt with a spectacular head kick knockout of Danielle Taylor last August. Ducote previously challenged Ilima Lei Macfarlane to the Bellator flyweight title.

Penne has won two straight fights, submitting Karolina Kowalkiewicz via first-round armbar in her most recent outing this past August. The one-time UFC strawweight title challenger holds a 3-3 record in the promotion.

Bellator featherweight standout Leah McCourt (6-2) looks to get back on the winning track when she faces Dayana Silva (10-7) in Bellator’s return to Dublin on Sept. 23.

This February saw McCourt lose her first Bellator bout, losing to Sinead Kvanagh unanimously. McCourt’s contender hopes were also stifled by the scale as she weighed in almost 3. 4 pounds over the featherweight limit for a bout against Janay Harding at Bellator 259.

Silva just won a victory over Harding in her first Bellator bout. In her two first appearances in the Bellator promotion, she lost to Julia Budd and Arlene Blencowe.

The bout was first reported by Severe MMA.

Hannah Cifers will be welcoming one the brightest prospects in the strawweight division to the UFC.

Undefeated Combate Global fighter Melissa Martinez (7-0) is set to make her UFC debut against Cifers (10-7) on Sept. 10 at a location still to be determined. The prospective matchup was first reported by Lichald Scott MMA.

A pro fighter since the age of 19, Martinez has competed primarily for Combate Global, racking up four knockout wins in six appearances. In her most recent outing in December 2019, she defeated Desiree Yanez by split decision.

Cifers has not competed since Augus 2020 and seeks her first win since August 2019. “Shockwave” has lost four straight fights, all by submission or TKO. She holds UFC victories over Jodie Esquibel and Polyana Viana.

Leah Letson is back in the bantamweight section for her next bout.

The Ultimate Fighter 28 featherweight tournament contestant meets Chelsea Chandler (4-1) in a 135-pound bout on Oct. 1 with a location still to be determined. Letson’s management team was first to announce the matchup.

Letson, competing at bantamweight for the first time in the UFC, finished as a semifinalist on TUF 28, losing to eventual season champion Macy Chiasson. She was victorious in her UFC debut against Julija Stoliarenko, but was then on the shelf for almost three years before returning at UFC Vegas 42 in November 2021 against Felicia Spencer. Letson was defeated by Spencer in the third round via TKO.

Chandler makes her UFC debut on a four-fight win streak. Since dropping her pro debut, the Invicta FC standout has scored victories against Mitzi Merry, Brittney Victoria, Olivia Parker, and Courtney King. She returns to bantamweight for the first time since June 2019.