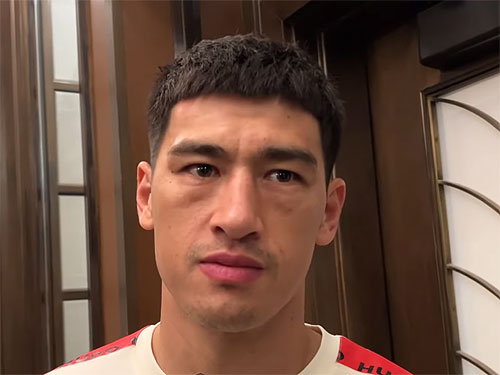 The WBA Super light heavyweight (up to 79.4 kg) title holder Russian Dmitry Bivol (20-0, 11 KOs) gave an interview to the American media after defeating the undisputed middleweight champion (up to 76.2 kg) and the pound-for leader -pound by Mexican Canelo Alvarez (57-2-2, 39 KOs).

In a conversation, Dmitry spoke about his well-being, described his feelings from the biggest fight in his career, spoke about his future, and also answered many other questions.

– Me and Dmitry Bivol after the fight with Canelo. How are you?

– How do you feel, did you have the biggest victory in your career yesterday?

– Yes, it was the biggest fight for me, because a lot of people watched this fight. I enjoyed. When the crowd cheered, it was nice.

– When you look at the fight as a whole, did it go the way you expected or did it go differently?

“I think the way I expected, but I didn’t expect Canelo to have such a defense. I knew he had good defense, but he is much better than I thought.

“Did you feel like you were too big for him, too fast, too skilled?” How did you feel when he hit you?

“I think maybe my plan was better than his.

Do you think your size played a role?

Yes, you were bigger.

How did you feel its power?

He is strong, of course. You saw him throw power punches every time.

— Oh, all bruised. How do you feel about it?

I can have one more fight [смеются].

Canelo did everything right, look at Bivol’s hand – ex-promoter of Alvarez

– When did you feel that you started to move forward?

– Did you feel that you were in control of the fight from the very beginning or at a certain moment?

Yes, I thought I was in control from the beginning. Yes, I didn’t hit much in the beginning, but I controlled the fight.

Why did you think you were in control of the fight? He backed up a bit, did you throw more punches?

“When you control someone, that feeling is inside you. You see that you are in control, you can step back, you can go forward, you can throw punches however you want.

– Did you feel that he was tired during the fight?

– Yes, I felt that he was tired, maybe in the seventh round. In the next rounds he was tired [показывает].

Did you also feel it in his punches?

– You know, his punches were a little weaker, but sometimes he charged a lot, like in the beginning.

– When you went to the twelfth round, did you feel that you were winning, or did you think that the fight was close?

“I felt like I was winning. And I also had to win this round 100% to feel that I did everything, and now it’s not up to me.

– Talking about it. The fight was over, you felt like you won, but when you read the judges’ notes, did you have any anxiety?

“So we were a little nervous.

“It was only one second.

– When the winner was announced, what came to your mind, what was that moment?

“I was just doing my job. I did what I had to. Just like this.

What did you say to Canelo after the fight?

– I told him: “Thank you for the fight. You are a great champion.”

He said similar words to me. I don’t remember what exactly, but they are similar.

Speaking of the future, do you want a rematch or do you want to do other things? Is there a clause in the contract that says that the rematch must take place?

— Yes, we have a rematch in the contract, but we do not have rules for a rematch. I don’t know what’s next. I need to speak to my team. Maybe Canelo should consider his performance? We must accept tonight and consider what is best.

– In a rematch, do you think that you will fight even better? How different will the revenge be?

“Of course, I think I know something now. Maybe he feels it too. I don’t know how he feels. But I feel like I can do a better fight.

What do you feel you can do better?

Do you think it’s better for Canelo to go for a rematch or stay at 76 kg?

– Do you want to go down to win titles or do you want to stay in order to be able to take all the titles against Smith or Beterbiev?

“Maybe I can. I need to think carefully about this. You know, 79.4 kg is not a problem for me. I don’t feel any problem here. This means that maybe I can make 76 kg. You know, before the coronavirus, I was 100% sure that I could, but the coronavirus gave me more [бьёт по животу]. I stayed at home and hoarded my fat.

— It seems to me that with your victory you have gained a lot of fans. A lot of people saw your boxing abilities. What do you want to say to boxing fans in terms of your future?

– I want to say thank you to all the boxing fans who watch my fights, who believe in me. I want to congratulate everyone who bet on me and made money [смеётся]. Don’t judge boxers by media, judge boxing by boxing skills. Try to learn boxing skills.