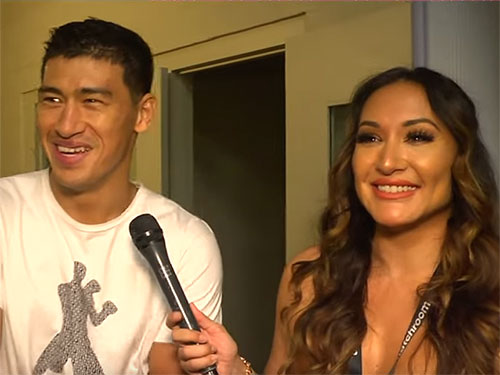 In a conversation, Dmitry commented on his victory over the absolute champion of the second middleweight (up to 76.2 kg) Mexican Canelo Alvarez (57-2-2, 39 KOs), expressed his opinion about the winning bet of the legendary American boxer Floyd Mayweather, answered the question about the rematch and suggested that it could take place in the second middle division.

Dmitry, congratulations. It was incredible. Today you shocked the world. You proved everyone wrong tonight. How are you feeling?

— I feel great. I won. I believed in myself, I proved to myself that I can be one of the best, that I can beat Canelo Alvarez.

– You said that you would like him to hit you harder, did I hear you right? Did you expect more power from him?

No, he has good strength. Of course, he threw every power punch.

– Fine. Congratulations to him.

– So you agree to a rematch with him. Was the weight gain too much for Canelo in your opinion?

– May be. He had a light heavyweight belt. Maybe he needs to try again. But his natural size is more for a second middleweight, I think. And mine too. Maybe in the next fight we will meet for all four titles in his division.

– Will you go down to the second middleweight?

— I don’t know if he keeps these belts or not. [смеётся].

“I don’t want to take up much of your time. I know the media wants to talk to you. Do you have any final words? I know you’ve agreed to a rematch…

– Yes, I said that if there is a rematch, there is no problem. But let’s make new negotiations. I took this fight… [добавляет менеджер Вадим Корнилов] It was an opportunity. That’s all there was. Nothing else was considered. Even if Bivol was the champion and Canelo the contender, with all due respect to him, we accepted all the terms they wanted. We just wanted to make sure the fight went on. And now he remains the champion, but he is also now the one who beat Canelo. I think everything should be fair. He needs to make up for what he missed in the first fight.

– Thank you for your time. All the best. What would you like to do next? Maybe 76 kg, who knows? Are there any final words?

“Just thanks to everyone who watched this fight and who believed in me. Thank you. Who believed in Canelo – he is a great champion, I agree with that. But today I was better.

— [продолжает другой репортёр] Now you will be famous in America.

— I like underdogs. You are really strong. Now everyone will know you.

– I was rooting for you despite the fact that Canelo is Hispanic. I saw your power, many great things. [говорит на русском] Thanks a lot.