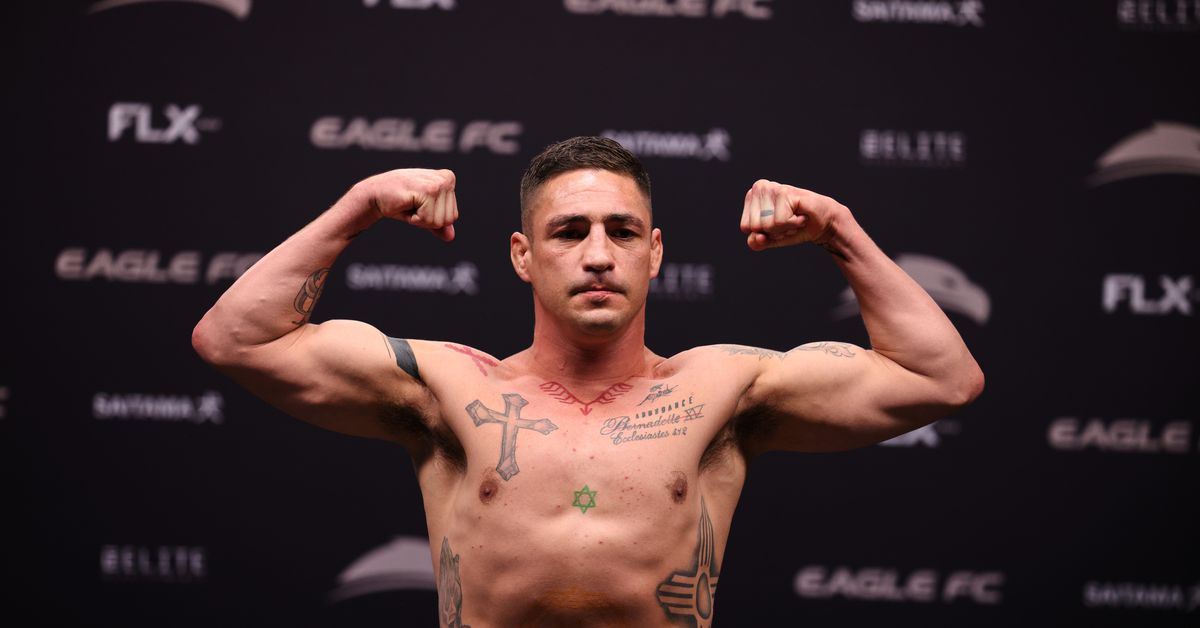 Diego Sanchez is ready to make the walk again for Eagle FC.

At Friday’s Eagle FC 46 event in Miami, the 40-year-old veteran dropped a unanimous decision to Kevin Lee in the 165-pound headlining bout in what was the promotional debut for both fighters. Afterwards, Sanchez spoke to the media about being proud of his performance and his plans to continue competing.

” I feel so disconnected from this sport, having not been in the cage as long and not fighting so much. There are a lot different emotions that came up during fight week. It wasn’t normal for me because in November and December, I was very close to death. The double pneumonia and blood clots in my legs meant that I was barely able to leave the hospital until December. It was not easy getting back into shape. This time it was much more challenging.

“But I’m hard-working and I just said you know what, I’m gonna do this. Ali [Abdelaziz], called me. Eagle FC offered this chance to me. When I saw the first press conference when Kevin Lee signed with Eagle FC I saw the attention that he was getting and I saw the eyes were on him and people were watching. This opportunity was not going to come back. You had to be strong and deal with all the obstacles. Then you have to give your best. And I almost did.”

Though the decision was without controversy, Sanchez put on a competitive effort against Lee, who later said he believes that he suffered a serious knee injury early in the bout. This was Sanchez’s first since a loss to Jake Matthews at UFC 253 in September 2020.

Sanchez felt encouraged by his performance, and he expects to complete his three-fight agreement with Eagle FC.

“Some people told me that they thought I won the second round, that it should have been 29-28, but like I said, this isn’t the best Diego Sanchez ever,” Sanchez said. I took it all in and did it. I got in the best shape I could in five weeks and coming out of retirement, coming out of the hospital.

Sanchez’s return to competition was met with public scrutiny, given the amount of fights he’s already been in (2022 marks Sanchez’s 20th year as a pro fighter and he now has 44 bouts under his belt) and the issues that the well-documented issues he’s faced outside of the cage.

During his recent run with the UFC, Sanchez became embroiled in a controversial partnership with self-styled guru Joshua Fabia, which ire from the MMA community. Sanchez himself later accused Fabia of “mental manipulation.” He understands the criticism that has come his away and stated that he considers that chapter of his life to be behind him.

“The truth of it is for the last two years I wasn’t really myself and I was letting someone else lead my life,” Sanchez said. “So I took control of the steering wheel and I did it the Diego Sanchez way. I did this training camp myself. I didn’t have a team. I did not run to [former coach Greg] Jackson. I did it myself. I was able to help my friends. … I had two training partners, I had two jiu-jitsu training and I had one mitt man. My team was the same.

“I didn’t do no sparring rounds, maybe three or four rounds of sparring in this training camp. I put the work in and I did what I could do and I went and I showed the world that all things are possible when you have God helping you.”

Sanchez admitted that he is definitely eyeing retirement once he is done fighting for Eagle FC, but he still has goals in mind and that includes a rematch with Kevin Lee and winning a title with the promotion.