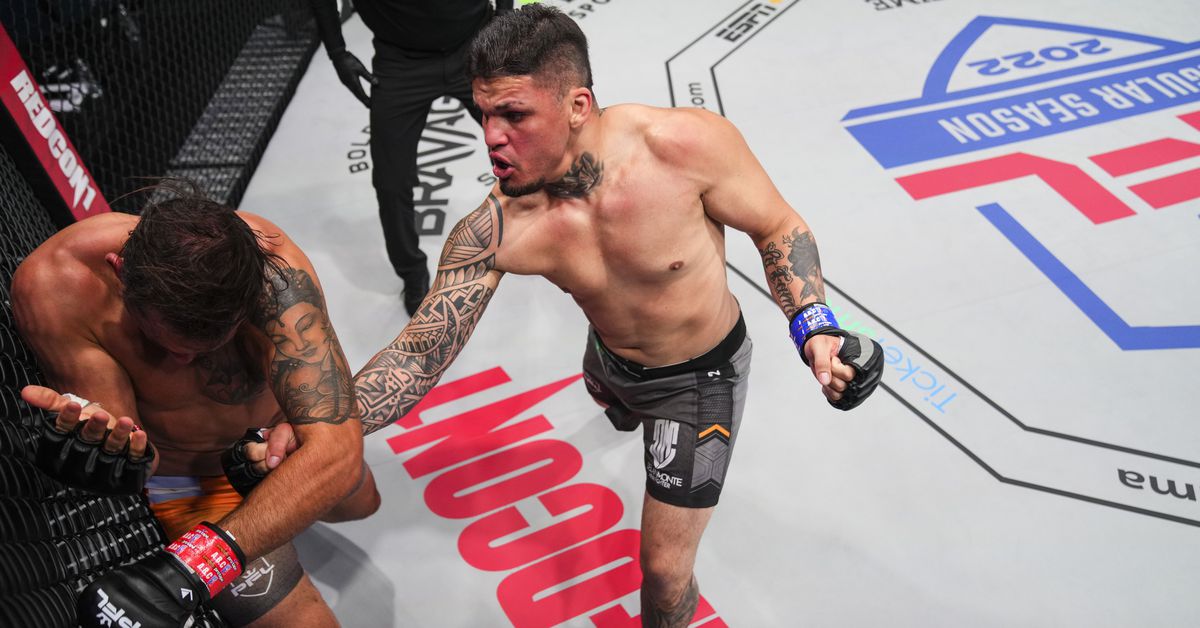 Delan Monte defines himself as a man of simple taste. The PFL light heavyweight, who grew up as a judoka and once dreamed of representing Brazil in the Olympics, is two wins away from pocketing $1 million in his promotion’s light heavyweight playoffs, but he isn’t thinking too much about the money. If you talk about shoes, that is.

In that case, Monte’s face immediately breaks out in a huge, glowing smile. You see, he has plans for what he’s going to do with seven-figure pay.

“[Winning] $1 million dollars changes the life of any person in the world,” Monte said this week on MMA Fighting’s Trocacao Franca, “but I’ll be honest with you, brother, I’m not focused on the money. Simple habits are my favorite thing about me. Sneakers .”

are my favorite thing.

Monte loves basketball sneakers. He currently owns more than a dozen Air Jordans, and at most “six to seven” Yeezys. Monte’s latest interests are New Balances — he already has two new pairs at home.

If the 28-year-old manages to beat Rob Wilkinson at Friday’s PFL 7 event in New York City and then gets past the winner of Omari Akhmedov vs. Josh Silveira later this year to win the $1 million grand prize, he’s going all-in with his collection, starting with the Jordan 1 Off-White Chicago and the Air Jordan 4 Off-White — “holy grails” worth thousands of dollars.

“Holy sh*t, brother. No doubt, half of that prize would go do sneakers,” he said with a laugh. “My wife would go nuts. First, I would buy a bigger house and have a room only for my sneakers. She wouldn’t complain anymore if I had shelves for my sneakers. My sneakers are taking over the house right now.

“Winning [final], On my way out to the cage, I will talk to Lucas [Lutkus] to check Stockx prices and then buy my sneakers. I don’t care about the money. I want to purchase my shoes.

In all seriousness, he adds, “I fight for my legacy. My father, brother, and family deserve happiness. Money is consequence. I’m healthy, brother. We can always go after the money. What we leave behind in this world is legacy. When we are gone, money stays with us. My name will be remembered. When someone says ‘Delan from Paraiba,’ [they’ll say,] ‘that guy was for real. He beat every American, Russian, or other country and took the whole thing .'”

Monte, who trains out of Evolucao Thai in Brazil, lost his PFL debut to current champion Antonio Carlos Junior in under a minute but bounced back in devastating fashion two months later, stopping 2020 season winner Emiliano Sordi in just 92 seconds. Monte is now promising the greatest performance against Wilkinson. Wilkinson has won four consecutive fights since leaving UFC after a defeat to Israel Adesanya.

” I always strive for perfection,” Monte stated. That’s why I love it. It’s going be in a gunfight if I win. Even if I lose, I will keep on shooting. My fight is not boring. No one will ever leave it. Emiliano Sordi was a tough opponent and I put all the pressure on him and got my right hand. This is what I expect to see in this fight. Wilkinson is sure to feel my right-hand and will go down .”

“He’s going to try to take me down,” Monte continued. It was something I heard backstage. “I felt his fear when we met at the last event. When fighters looks at each other, we know what they are feeling. He’ll probably try to bring me down if I put too much pressure on him. I’m a black belt in judo, he won’t be able to take me down. He has a hole in his stand-up, it’s too open, and we’re working hard on that. I’ll use my jab just like Adesanya did. When I start to hurt him to see that he’s getting tired, then I’ll throw my right hand.”