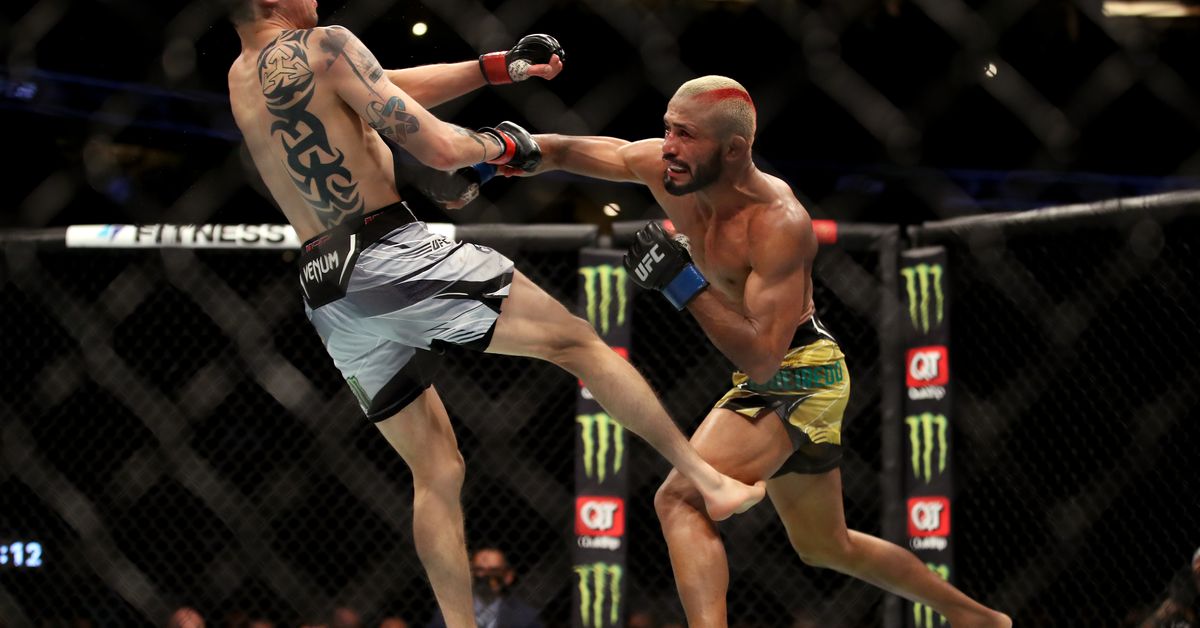 There was one word Deiveson Figueiredo used at the UFC 270 post-fight press conference that needed no translation: crybaby.

The Brazilian champ had used it before to describe his opponent, Brandon Moreno, but he relished it a little bit more after reclaiming the UFC flyweight title on Saturday at Honda Center in Anaheim, Calif.

In response to Moreno saying he thought he won, Figueiredo deadpanned, “It was 4-1. Five knockdowns were recorded. It was funny that it was 4-1 – they could have just [given] me every round.”

Two of three judges scored it 3-2 in favor of Figueiredo, 48-47, while a third awarded a wider margin of 49-46. After a week of antagonizing Moreno’s fans, it was no surprise that the champion had been recrowned.

The only close-miss Figueiredo remarked on was his right hand which sat down the Mexican champion at the end the third round.

” If it were 30 more seconds, I think I would have got him,” Figueiredo stated. “I think he lost his senses a little bit. He looked like he was not feeling too well there and was kind of saved by the buzzer. I feel his soul left his body, and I feel with 30 seconds I would have killed it.”

Figueiredo expressed his gratitude to his team, which also included Henry Cejudo, a former champion in two divisions, out of Fight Ready, Scottsdale, Ariz. for calming the aggressiveness that enabled him to enter championship rounds.

“I used to come into the octagon so full of energy trying to finish people off in the first minutes, and it was very important to keep calm and become even more dangerous,” he said. “Because then, my strikes would come as a surprise to him.”

The shock from Honda Center’s crowd wasn’t welcome as the pro–Moreno crowd booed and cheered. Nothing Figueiredo said or did changed that, but the champ took a special pleasure in having the last laugh.

“I can definitely feel the warmth,” he joked. I love it when people swear at and yell at my. I love Mexico so much, I cherish it so much, I’m going to make a video for him eating burritos and saying how much I love Mexico. I wanted to knock him out, and I felt that the crowd was feeling it. And if it wasn’t for those 30 seconds, I feel I would have done it.”

Figueiredo seemed to be pandering, welcoming Moreno’s fourth fight in his post-fight speech. This sentiment changed when Figueiredo considered the circumstances of the trilogy fight, the sparring they had done over scheduling and all the potential contenders.

“Brandon didn’t give me the chance to fight him again,” the UFC flyweight champ said. “He didn’t want to, except [Alexandre] Pantoja got hurt. The UFC offered him the fight. We’ll see .”

if he acts well over the next few months.

There’s already a front-runner for the next outing, and it may not be the champ.

“Kai Kara-France, obviously,” Figueiredo said. “I want to knock him out, and he knocked out Cody Garbrandt, so that’s the guy I wanted to knock out. It’s not in my interest to fight Cody any more, so it’s Kai Kara-France.”

“If he acts well and it is a good fight then this is the place I will fight. This is also where I plan to make my million,” Figueiredo said later. He was referring to the fact that I had been his largest sponsorship. He was talking about the fact that I had his biggest sponsorship. I said I would take it away. So fighting Brandon is going to be the thing that gives me more money.”