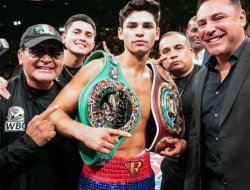 Popular American lightweights Gervonta Davis (27-0, 25 KOs) and Ryan Garcia (23-0, 19 KOs) are trying to negotiate a face-to-face fight, which, in terms of its financial potential, could become the most successful fight in boxing in recent years.

Yesterday, an insider even announced the date and venue of the fight, and the fighters indirectly confirmed it. Reviewers turned to Garcia’s promoter Oscar De La Hoya (Golden Boy Promotions).

His
answer: “All I can say about this is that negotiations are underway. Will this fight be next? I believe so. Because both sides want it. It’s also the biggest fight in boxing to date. Moreover, both fighters reached their peak. ‘Tank’ Davis is definitely out, and Ryan is either close to it or hasn’t really even started yet.”

De La Hoya on how both fighters simultaneously wrote on social networks “deal closed”: “And why did you think that they wrote this about a contract? I think there was something else. Perhaps they arranged a meeting or something. But this is definitely not about the contract and not about the fact that everything has already been agreed upon in the duel. They both want this fight so badly… Do I believe it will happen? I don’t even doubt it.”

The promoter believes that the fight should take place now, as “he has reached his peak. They say he’s really hot. I believe that both sides understand this. I believe that everyone realizes that in this case it is better not to postpone until tomorrow. But negotiations are not easy. That’s what always happens in fights of this magnitude. Lots of little details. It’s not just about agreeing on the distribution of fees.”

Earlier, the undisputed champion in this weight, Haney explained why the fight with Lomachenko is more real than with Davis. Back in October, there were rumors that Gervonta and Ryan almost agreed. And then “The tank suddenly lost the handle.”