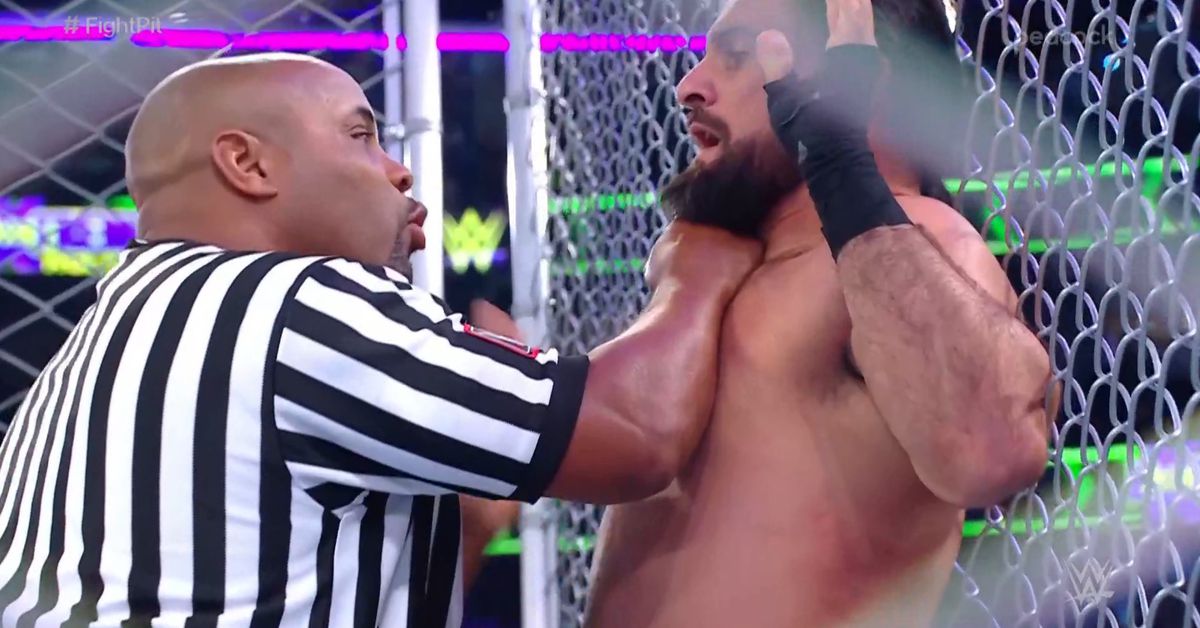 Daniel Cormier hopes to continue working with WWE after his recent debut as a guest referee at Extreme Rules. He needs to get some work done first.

The UFC Hall of Famer recently reflected on the experience on his ESPN show, DC & RC. Cormier, a long-time fan of professional wrestling, said that he enjoyed the opportunity to be the third man in the cage during the Fight Pit match between Matt Riddle, a veteran of the UFC, and Seth Rollins. Riddle won the tapout. Cormier gained a greater respect for the talent and athleticism of WWE wrestlers through the cameo. He said that he has already been in preliminary conversations with WWE about doing additional work for them. He will only do it if he agrees to.

“Let me tell you something, so I came home and my partner at my barbershops, he was at my house and he was like, ‘Damn, you look a lot bigger on TV,'” Cormier said following the event, laughing. “I was like, TV adds a few pounds — and the stripes didn’t help. But that visual is why I’m going to lose weight. This visual is the reason your boy will lose weight.

“They were asking me about future opportunities in WWE, and I said, “I will do it, but first, I have to be in good shape.” Like, take some time for your guy to clear out all of his baggage, like this. Let me get rid of some of the checked baggage and then maybe do a couple carry-ons, and then now I’m able to go and do some things in the ring. Let me have a couple carry-ons on the side and not the entire huge suitcase.”

Cormier also joked that the classic black-and-white striped referee outfit he wore for the event made him look like a Foot Locker employee.

A 43-year-old former two-division UFC champion, Cormier hung up his MMA gloves for good in 2020 following back-to-back title losses to Stipe Miocic, transitioning to a full-time broadcast role as one of the UFC’s lead commentators and analysts. But after long flirting with professional wrestling, “DC” said his WWE moment was a different kind of surreal.

” I was at the back, and because I knew the result, I began to forget the match. So, Cormier laughed. “I was so nervous, bro. But once I walked out there, it was so fun. The energy of the crowd is like second to none. I’ve fought in front of bigger crowds than I was in front of last weekend, but ultimately that’s just — it’s a shoot, right? I will just fight [in MMA],, and that is what it will be.

“But to remember all the points of what you’re supposed to do in the match, dude, it was amazing. Then I’ve got fans heckling me, they’re calling me Carl Winslow [from Family Matters] in there, they’re messing with me. Bro, they said, ‘DC, climb up the cage.’ I’m standing at the bottom like, ‘I’m not going up there with these dudes.’ They’re up there actually wrestling on that little ledge, bro. I was like, ‘This is crazy.’ Then when Riddle jumped off the top, I was like, man, I couldn’t believe that I was actually in that moment.”