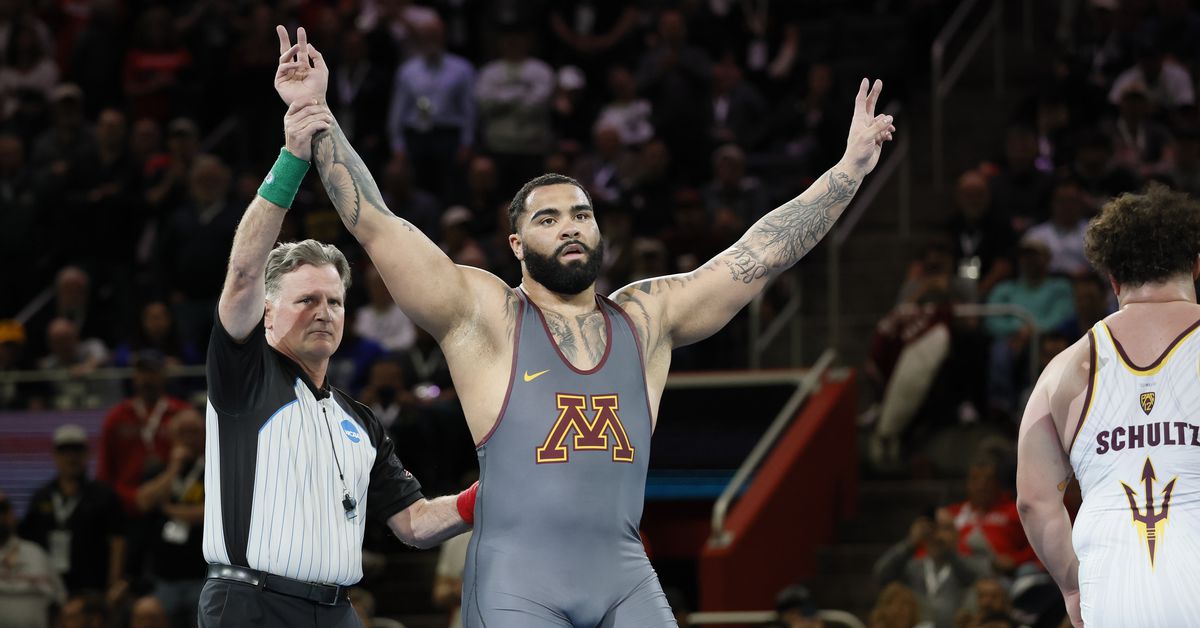 When Gable Steveson wrapped up his second consecutive NCAA championship this past Saturday night then left his shoes on the mat to signify his retirement from the sport of wrestling, Daniel Cormier admittedly had conflicted feelings about the decision.

The former UFC two-division champion was a color commentator in Steveson’s last match. This came seven months after his gold medal victory at the 2020 Olympic Games to close off an incredible run of American wrestling. After signing an NIL agreement (name, images and likeness rights with WWE) before the college season, Steveson has now retired to be able to transition full-time into pro wrestling.

As a lifelong advocate for U.S. wrestling, Cormier knows the kind of impact Steveson could have made if he stuck around for another Olympic cycle, but he also understands why the 21-year-old phenom would want to jump to WWE sooner rather than later.

“He’s the type of kid, with all the NIL deals, who could truly cash out without much challenge,” Cormier told MMA Fighting. He could possibly wrestle in this tournament again, maybe another year. I’m not sure how long he is out of [for] eligibility but he could still wrestle next year and get the same results as last year. And he would make tons of money.

“Because now with the NIL deals, he’s so marketable. Although he could cash in, the truth is that he has made a decision to move on to greater and better things. He’s going be amazing, I think. The kid is an entertainer. It he gets it

Shortly after securing his Olympic gold medal from Japan, Steveson said to MMA Fighting that he was exploring all options, including a move into pro wrestling or mixed martial arts. Steveson had even called for a meeting with UFC president Dana White in hopes of enticing the promotion to pursue his services.

Ultimately, the University of Minnesota standout opted for pro wrestling over MMA, but much like his fellow Golden Gopher Brock Lesnar, who was a superstar in WWE before becoming a UFC champion, he could eventually test himself in fighting a few years down the road.

While that is an option, Cormier thinks that Steveson would be better off pursuing fighting while he still has the greatest wrestler in the country than following Lesnar’s path.

“Gable Steveson in fighting would be a world champion,” Cormier said. “Here’s the thing — when you look at Brock leaving college and going into the WWE, making the WWE name and then coming back to fighting, fantastic. Gable’s more equipped to fight first than WWE.

“I think he will do great [in WWE],, but I believe he is better equipped to handle the professional side of the equation, and then transfer that to WWE. But we’ll see.”

Cormier knows also that Steveson has far less control of his future with WWE. The creative team, headed by Vince McMahon (long-standing chairman), will determine the type of push he will receive in the ring.

Thus far, WWE has been loud in its support of Steveson since he inked his NIL deal with the company, but that still doesn’t mean he’ll just instantly become a superstar.

“The kid knows how to entertain,” Cormier said. “But the reality is — and this is the only thing that I caution when you walk away from something that you can control, because he can control being the best in the world in wrestling and the best in the national tournament — he’s got to be booked right in WWE.

“I know those guys do a fantastic job and they’ll take care of him, but there are more Shelton Benjamins, Chad Gables, there’s more of those guys than there are of Kurt Angles. It’s more common to find high-level wrestlers who went above [to WWE] but weren’t booked well than those that clicked with Kurt. Gable should be in the Kurt group and get booked right. I wish him a long and successful career. He seems to fit the bill. Many guys have tried to go over, but not had much success .”

As Cormier mentioned, WWE has pursued many past wrestling champions like Angle, who was an Olympic gold medalist in 1996, as well as Lesnar after he claimed an NCAA title at heavyweight back in 2000.

Lesnar has arguably had the most successful career over a longer period of time than any amateur wrestler to make the move into WWE, but Cormier knows that’s an awfully high bar to set for Steveson or anyone else.

” I think Gable’s personality, and his capabilities can take him to the top,” Cormier stated. “Look, I’m not sure if anyone can do what Brock [Lesnar] did or Roman Reigns. The way Roman Reigns was booked throughout his entire career has made him a beast. These guys are rare.

” Even a man like Drew McIntyre who is physically gifted can still tell you that they love him. He doesn’t get booked as often as Roman and Brock. [Gable] is a worthy candidate for the top. But it’s only a matter, once again, of the creative departments getting together, and asking, “What should we do with this kid ?'”

Cormier is certain that Steveson will end up in the hands the fans. His ability to communicate with them will allow the WWE to press him further and more, or to bury him, if the response to him arrives muted.

“A lot of it’s going to be based on reception also,” Cormier said. In WWE, the crowd decides where you will go. We both know that.

” I just hope he’s over the crowd or on the other side and booed as Kurt, and then they play with that .”

“Usyk is next!” Bob Arum on Fury’s victory and fight for the undisputed champion