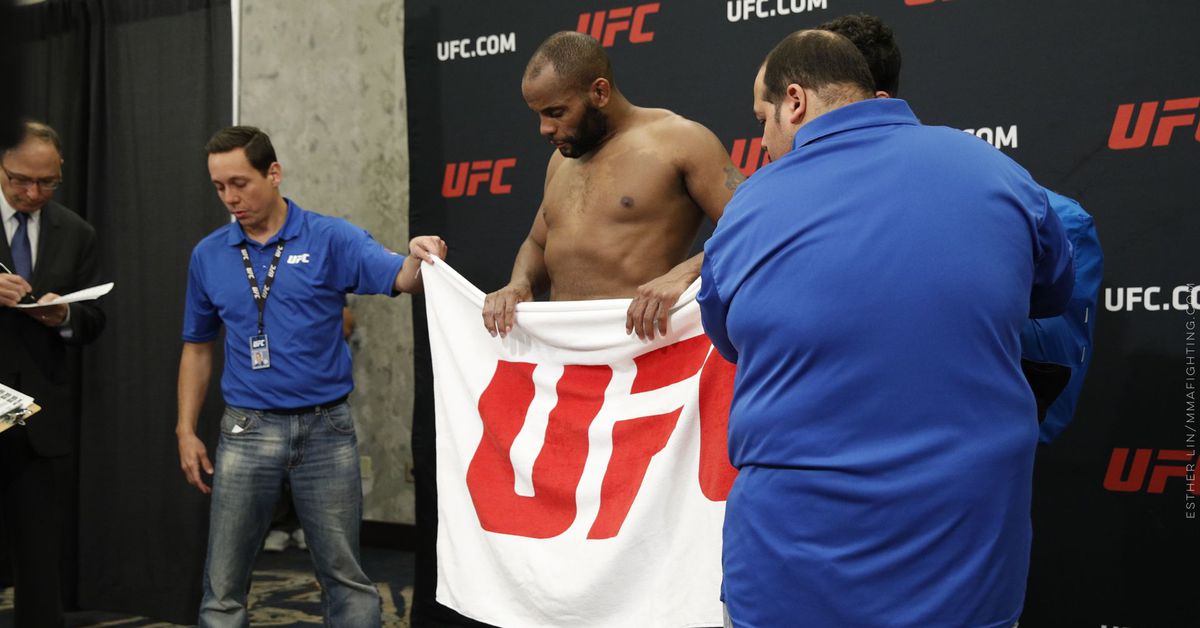 On one of the biggest nights of his life, Daniel Cormier decided that his induction into the UFC Hall of Fame was finally time to come clean about one of the most debated moments during his career.

At UFC 210, as he attempted to defend his light heavyweight title for the second time, Cormier struggled through a difficult weight cut that ended with him over the 205-pound limit on his initial attempt. When he returned to the scale moments later, Cormier shed his clothes and stood behind a towel before the announcement was made that he hit the mark at 205 pounds.

Cormier admitted on Thursday that he might have received a bit of help in gaining weight to fight Anthony Johnson.

“Guys! I’m here to tell you something. I believe this is the right time for me to completely be transparent,” Cormier stated on stage. “I think I may have grabbed the towel in Buffalo.”

Cormier then detailed the difficulty he faced that day trying to make the light heavyweight limit and how it appeared he was about to give up, which would have resulted in the UFC title being stripped.

That was when Cormier got a reminder from one of his friends and coaches about an old-school wrestling trick that might give him enough leverage to tip the balance in his favor.

“I walk back, [my coach] he goes ‘DC, do you remember the old wrestling trick?’ I said, can you stand behind me? There are two options: you can place your hands behind your head and someone can help you. He replied, “No, that’s not the towel one .'”

The trick involved Cormier putting his hands on the towel as he was standing on the scale, which would alleviate just enough weight so he would appear to make the 205-pound limit.

Looking back now, Cormier admits that fate smiled on him that day because the New York Athletic Commission overseeing the weigh-ins in Buffalo failed to notice he touched the towel before reading out his official weight.

“Do you understand the level of ridiculousness that has to happen in order for that to work?” Cormier said. Cormier said, “I couldn’t believe my luck. I am a lucky guy. Even when I would lose, the belt would just somehow come back to me. I was like, I’m a lucky guy.

Cormier won the fight via second round submission.

Outside of addressing “towel-gate,” Cormier also spent time addressing many of his coaches and teammates over the years who helped him eventually become a two-division champion in the UFC.

One person in particular who Cormier shouted out was ex-UFC heavyweight champion Cain Velasquez, who was one of his main training partners while also becoming one of his best friends through the years.

Velasquez currently is being held in California without bail for attempted murder. However, Cormier continues to support the case and sent another message to support his friend on Thursday.

“Every single moment that I had, Cain Velasquez was to my right and to my left,” Cormier said. “He never let me do it alone.

Emotions eventually got the better of Cormier when he paid tribute to his parents, who both passed away before they could see him inducted into the UFC Hall of Fame, but he mostly gave his speech with a giant smile on his face as he celebrated his historic career in combat sports.

“Guys. This has been an absolute goal of mine,” Cormier stated. “I am a man who has always enjoyed sports and understand the importance of the Hall of Fame. These three words are a way for me to understand how an athlete’s life is remembered. This is why I wanted you to understand .”