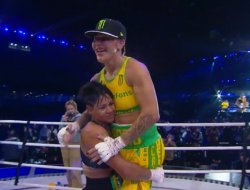 The fight took place as part of the event Fight Music Show 2and the promotion’s middleweight title was on the line.

Cyborg boxed with an aggressive first number, invested in punches. At first, Silva was very difficult, but then she got used to it a little and even caught a sweeping opponent and responded with counterattacks.

The fight went the full 8-round distance, and Justino was clearly enjoying being in the ring.

As part of the evening, the local 46-year-old conqueror of two divisions Acelino “Popo” Freitas knocked out a 48-year-old former MMA compatriot in the starting round Jose “Pele” Lundy-Jones.

Grandfathers gave a serious batch. All this looked bright and even epic, but (considering the age of the combatants) are such events not too dangerous?