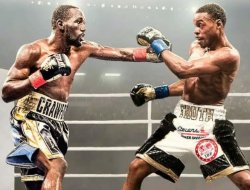 The fight for the status of the absolute welterweight champion between Errol Spence (28-0, 22 KOs) and Terence Crawford (38-0, 29 KOs) is again (yes, as much as possible!) In jeopardy due to a protracted dispute over the terms of the contract. He writes about this with reference to sources
ESPN.

Spence and Crawford agreed on the main terms, with Terence agreeing to a smaller portion of the prize money. But the problem is that Crawford wants transparency in terms of spending on events, since there is no guaranteed fee clause in the contract.

Since Crawford will only receive a percentage of net sales, the sources said he wants to be able to approve spending.

Crawford is a free agent after parting ways with Top Rank.

The sources also said the proposed deal includes a revenge clause. If it works, the winner will receive most of the return bout revenue.

If negotiations drag on, it’s possible that 35-year-old Crawford will want to fight one more fight before facing Spence.

According to the interlocutors of the resource, if the fight at PPV in Las Vegas (USA) is still finalized, it will not take place on the scheduled date of November 19, but rather in December or even January.

Promoter Bob Arum predicted the outcome of this fight. And later, the legendary techie Ward dismantled the superfight in detail.