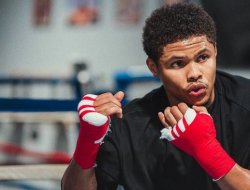 “If the little puppy doesn’t want to fight, let’s go then, who’s next in line? Cepeda or Kambosos, it doesn’t matter to me. One way or another, I’ll ruin a couple of these people, ”Shakur promised on chill.

When they assented to him – they say, for sure, the fight against Cepeda will be “fire”, Stevenson tagged DAZN Boxing and ESPN, said “I agree” and “organize it.”

“Due to the fact that Cepeda brings down people, he was like such a scarecrow. Well, then let’s see what all the hype is about, ”the American added.

“Lomachenko is easier, we will knock him out.” Cruz doesn’t want Stevenson fight

One of the followers warned Shakur that William is a “serious” fighter.

“That’s it. So when I box his head off, you will all say that I am the same person, ”Stevenson responded.

At the end of October, we recall, Cepeda confidently beat Diaz, and in May he killed the ex-champion in a bright makhache.

Shakur was even asked if he would fight a certain Edwin De Los Santos (15-1, 14 KOs), a 23-year-old southpaw from the Dominican Republic. The answer was right for the fighter: “And he can get lyuli too.”

Magomedsharipov learned the name of the next opponent in Bellator