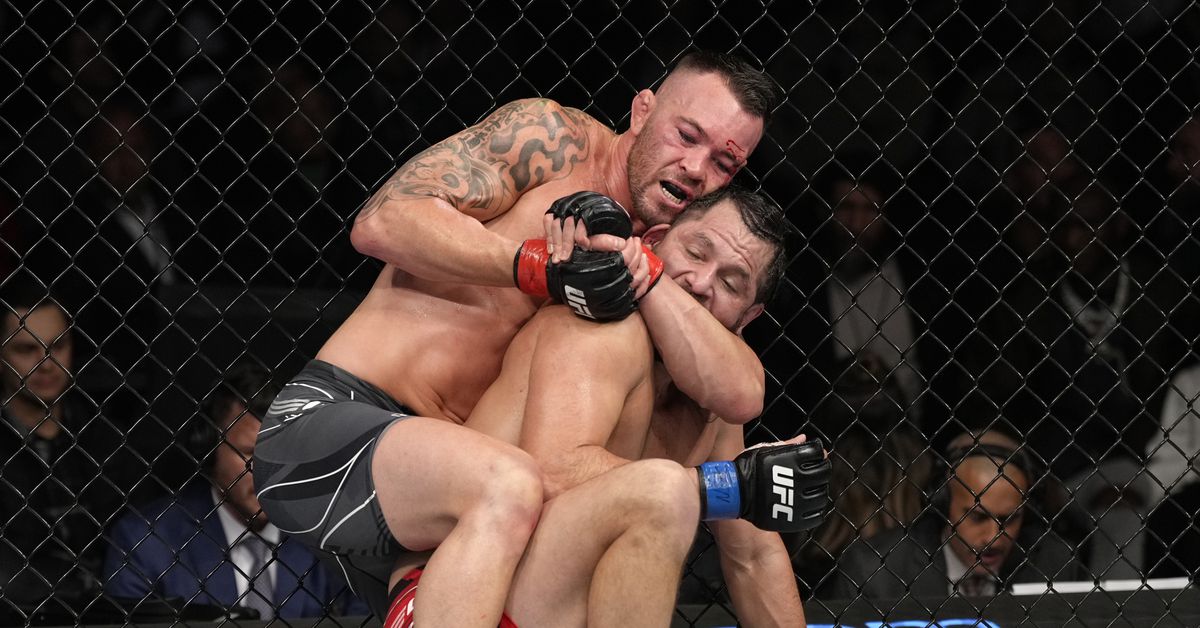 Love him or hate him, Colby Covington is an incredible fighter and he proved that yet again in the UFC 272 main event.

Taking on former friend turned bitter rival Jorge Masvidal on Saturday night, Covington depended on his wrestling to pour on the punishment round after round to secure a lopsided decision win after five rounds. Covington earned a unanimous decision with the scorecards all in his favor as the judges gave him the fight 50-44, 50-45 and 49-46.

There was definitely no hug or handshake afterwards but Covington was more than ready to put Masvidal behind him as he decided to then take aim at yet another ex-teammate he hopes to fight next.

“I took care of Miami’s street trash. Now it is time to deal with Louisiana swamp trash,” Covington shouted. “Where you at Dustin Poirier, you c***. You said it’s on sight. Dustin, name the place. Bring that jezebel of a wife and bring that little kid and I’ll see you soon. You’re next.”

Covington had to first dispatch Masvidal before he could call out Poirier in a future fight. He did this with a convincing performance.

Although the strategy was not flashy, it proved to be effective. Covington decided to hurry forward and look for the takedown. Masvidal was then forced to claw and scratch his way off the ground. After dragging Masvidal to the floor, Covington draped Masvidal on his back and gave him no chance of escaping.

While Masvidal was fighting early, Covington was just trying to keep up with him by applying pressure and peppering off with punches. Covington used his striking to setup his wrestling, and he was constantly looking for takedowns against his cage.

In the few moments that Covington had some breathing room, Masvidal caught Covington using his punches. One of these shots opened an eye and Masvidal took it down. Covington, who was always moving forward and pushing Masvidal against a fence, made it difficult to stay at distance.

Masvidal was doing his best to land punches whenever Covington would rush forward but the aggression was nearly unavoidable. Again and again, Covington was snatching the takedown and that’s where he really started to do damage, especially when he was able to smash away at his former teammate with elbows.

It seemed with each passing minute that Covington was just inching closer and closer to a lopsided win but Masvidal refused to go away. Masvidal slapped Covington in the face with a right-hander midway through round four, bringing the former interim champion to his knees.

With Covington wobbled, Masvidal tried to surge ahead but he couldn’t really mount anymore offense that would have allowed him to finish the fight. Ultimately that was the one moment where Masvidal could have potentially pulled off the upset because Covington had no intention of giving him an inch for the rest of the fight.

Much like the majority of the fight, Covington spent the final round hanging on Masvidal as he continued to pour on the punishment as he secured the victory in the grudge match. Deflated after a difficult loss, Masvidal admitted that his grappling failed him against the former All-American wrestler from Oregon State.

” I needed to wrestle harder,” Masvidal stated. “My wrestling wasn’t there today, I was flat. Wrestling was off today, I didn’t have it today.”

The win settles a long standing beef between Covington and Masvidal that dates back to the days when they were both training at American Top Team in Florida. Obviously the loss will sting for Masvidal for quite some time while Covington appears ready to move onto another grudge match with Poirier, who has teased a potential move to welterweight in the past.

Although it’s impossible to predict if UFC will book the fight, Covington wants Poirier next and is still working towards his goal of being welterweight champion.