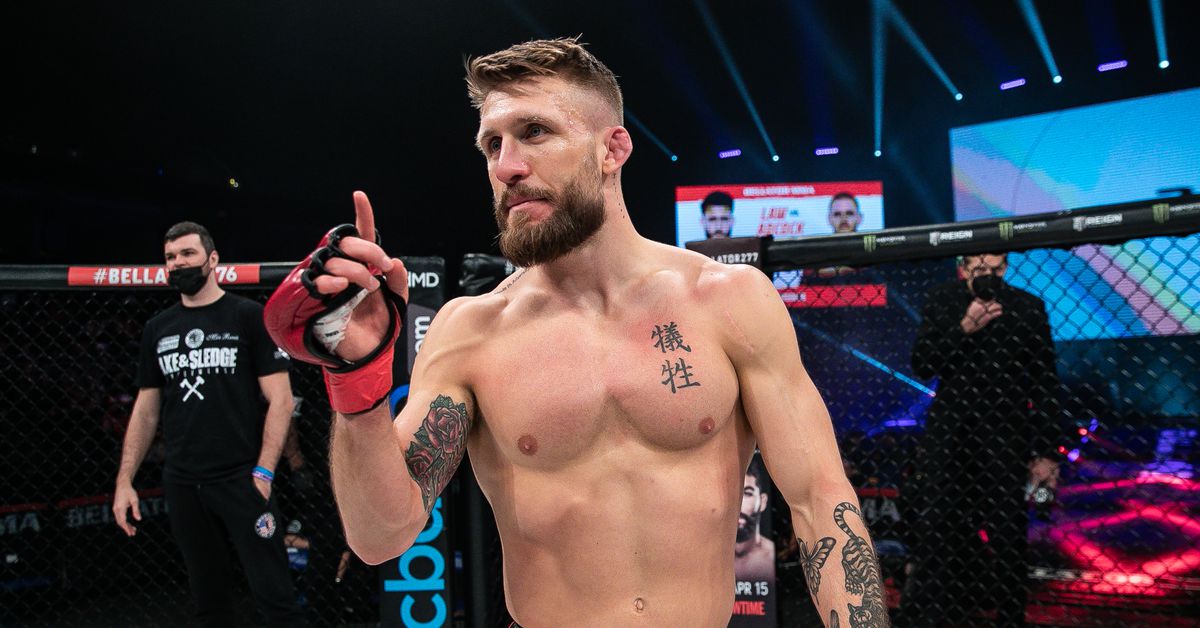 There’s calling your shot and then there’s what Cody Law did on Saturday night.

Law needed just 77 seconds to punch out James Adcock at Bellator 276 in St. Louis, yet as impressive his performance was, the story that emerged from the finish was even more amazing. One might even say, unbelievable.

Law’s manager Abraham Kawa told Ariel Helwani that Law had previously written down the exact time and method of stoppage, a message that Helwani relayed on Twitter.

Cody Law just beat James Adcock via KO at 1:17 of round 1 in Bellator.

Per his manager Abraham Kawa, Cody wrote this prediction in his hotel room before leaving for the fight. Kawa took a pic and just sent it to me.

I mean that’s just insane! He called it. pic.twitter.com/j6InyyAFgy

On The MMA Hour on Monday, Law talked about the incredible prediction and how it informs his approach to his fighting career and life in general.

” I’ve been keeping track of stuff for many years,” Law stated. Law said, “I remember writing down stuff even during amateur fights. When I first started fighting for Bellator, I would get to the hotels and they would always have a notepad sitting out with a pen, and I just started writing it down because I believe in that kind of stuff. This week I remember going to the hotel on Tuesday night and seeing the Renaissance tablet. I was so excited to see it and to have it written down. So I wrote that down and just kind of left it there.

As for how he landed on 1:17, Law said he originally was going to write 1:15, but he felt it was too generic, so he plucked the new number off the top off his head. Though it’s been a ritual for him since he began his fighting career, this is first time Law recalls nailing the prediction on the dot.

The 26-year-old featherweight scored his third straight KO/TKO win and is now 6-0 as a pro. His success is due to visualization.

“I started doing this specifically at the beginning of 2020,” Law said. “I got back into the whole writing things down that you want to happen, so I started this routine every morning where I would write three things down every day in a notebook as if they already happened. As I was reading the notes, I thought, “Oh, that already happened.” I began to see how these things could come true. Many of what I had written down would come true.

I wrote down things like the fact that I would get a contract with Bellator. They don’t always happen, like I wrote that I would end 2021 6-0 and I only ended up 5-0. But these are things that I like to do and I’ve kind of been on a routine with it, and obviously I think it’s real.”

Law currently fights out of American Top Team in Florida and his teammates Johnny Eblen and Roman Faraldo also picked up wins at Bellator 276. Eblen defeated John Salter to improve to 11-0 and possibly booked himself a shot at middleweight champion Gegard Mousasi, while Faraldo needed just 44 seconds to knock out Kelvin Rayford.

ATT wasn’t Law’s first team. Law began his college wrestling career on the famous Penn State team. However, he transferred to the University of Pittsburgh-Johnstown after his freshman year to improve his chances of winning an individual championship and went on to capture a Division II national title in 2018.

He credits his season at Penn State with introducing him to a new way of preparing for athletic competition.

“Quentin [Wright] was a beast, a national champ at Penn State,” Law said. Law said, “He was correct. At Penn State [head coach] Cael [Sanderson] the coaching staff taught us a lot about that type of stuff.” We would draw pictures of ourselves on the podium, we would do these kinds of exercises that you wouldn’t really think you’d hear a college wrestling team do. But we would, we’d take pictures of ourselves on a fake podium, we’d write goals down — that’s kind of where I really learned about visualization.”

Law plans to compete in June again and build on his excellent start with Bellator. This is the only place he has competed since turning professional.

For those who doubt his ability to predict, Law disbelieves that any person would think his team would do anything for a hoax.

“It was one of those things where I seen people being like, ‘This is so fake,'” Law said. “I was like, why would I ever go to the lengths of doctoring [this]? What would it take to doctor a photograph and make the time stamp ?”

“When did Abe send you the photo of that?” he continued. Right after I fought. What did people think, Abe was sitting in the crowd with a Renaissance notebook waiting to write this down at whatever time I finished? It’s crazy.”