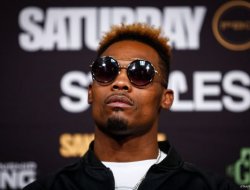 The absolute champion of the first middleweight (up to 69.9 kg) American Jermell Charlo (35-1-1, 19 KOs) is dissatisfied with talk that one of the leaders in the P4P rating, compatriot Terence Crawford (38-0, 29 KO).

The other day, Jermell was terribly angry with Crawford’s coach Brian McIntyre – he believes that it will be much more difficult for Terence not with Charlo, but with welterweight Errol Spence.

E-Charlo and Crawford got into an altercation on social media.

Jermell
wrote: “I knocked out much tougher fighters. Who did he actually beat? Let’s compare. Who did he even fight with? At 69.9 kg, even Erickson Lubin. Terence, come up here, you’ll see for yourself.”

Crawford
answered: “Wow! Do you want attention? So are you a boxer or a matchmaker? Or are you just afraid that I will soon get to your asshole? Dude, you really act like a character from a cheap movie.”

Lubin is a near-top boxer of the division, an ex-challenger. In 2017, he tried to take the title from Charlo, but lost by knockout already in the starting round.

Rumor has it that Crawford and Charlo are busy. Terence tries to make a fight with Spence. True, the fight is now in jeopardy. And Jermella is getting married to Australian contender Tim Tszyu. He was about to hit Charlo with spears and “wants to hurt him.”