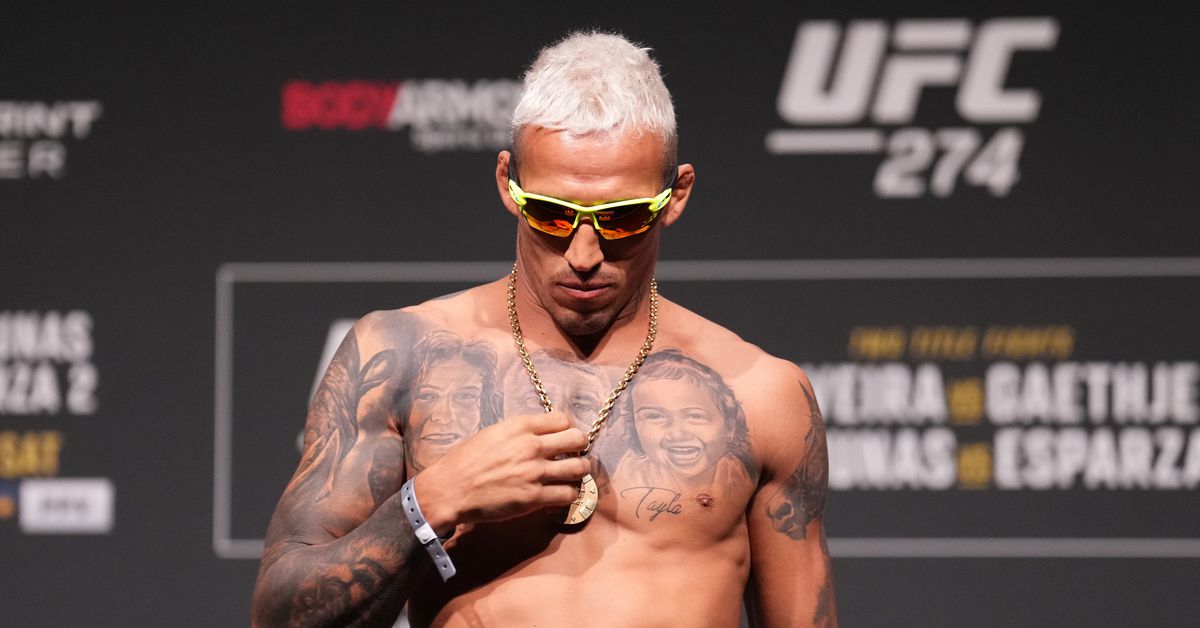 Charles Oliveira is no longer the UFC lightweight champion, but vows to be as confident as ever going into his UFC 274 main event bout with Justin Gaethje. The UFC announced that the 155-pound title will be vacant as soon as Oliveira enters the octagon Saturday night, and only Gaethje can claim it with a victory since “do Bronx” missed weight by 0. 5 pounds on Friday morning.

Several fighters said to MMA Fighting that the scale in their hotel was misaligned and made them believe they were heavier than they really were. Norma Dumont and Oliveira missed weight for UFC 274, and Oliveira said in an interview with ESPN after the ceremonial weigh-ins that he’s not mentally affected by the chaotic sequence of events.

” If they think it’s going to frustrate them, they’re going see a Charles 10 Times better,” Oliveira stated in Portuguese. I’m up for it. The champion’s name is Charles Oliveira, there’s no one else.”

Oliveira lost weight as a featherweight in the UFC. He has also weighed less than the UFC limit on several occasions since moving to lightweight. For his fight with Jim Miller, 2018., he was as thin as 152 lbs. Oliveira and his team posted on social media Thursday night he was already on weight, but claim the hotel scale tricked them to believe it.

“I made weight Thursday night,” Oliveira said. “Man, we’re not here to make up stories. My daughter is the most important person in my life, and I swear that she is my only hope. Like every other time, I weighed myself on UFC’s scales on Thursday night. On Friday morning, we went there [to check the weight] and it was 1kg [2,2 pounds] over. I said, ‘This is crazy. You can’t drink or eat anything. I must be less than this. We started the war [cutting weight again]..

“Every other fighter [said] the same thing, 300g or 500g [0.6 to 1.1 pounds] over. We saw that they even told the commission it was over, and they never told us. And still, as the champion, I dedicated to cut the weight and there was 0,5 pounds left, which is the exact 0,5 pounds over in the scale. The champion has a name and his name is Charles Oliveira. This is my second appearance to show that I am the champion.

The Arizona Boxing & Mixed Martial Arts Commission issued a statement to MMA Fighting on the matter, saying that “any scales used for any purpose other than official weigh-ins (such as those that may be used for fighters to unofficially test their weight) are not calibrated or inspected by Commission Staff as they are typically provided by the Promoter, not the Arizona Boxing & MMA Commission.”

The UFC did not respond to MMA Fighting’s request for comment.

Oliveira was given an extra hour by the local commission to try and make weight, but still came back 0,5 pounds over.

“I had already made weight, so your head isn’t there anymore,” Oliveira said. “I went to sauna and hit pads. I was the champion. Even though I was already [before]., the champion must do all things to lose weight. I did everything. The scale did not move even though I had sacrificed. The first time I went to the scale, I had my underwear on. I came back at the same weight. I then took off the clothes and it returned the exact weight. It’s hard to explain. But the champion has a name and his name is Charles Oliveira. I came here to once again show my story of overcoming and I’ll overcome once more time.”