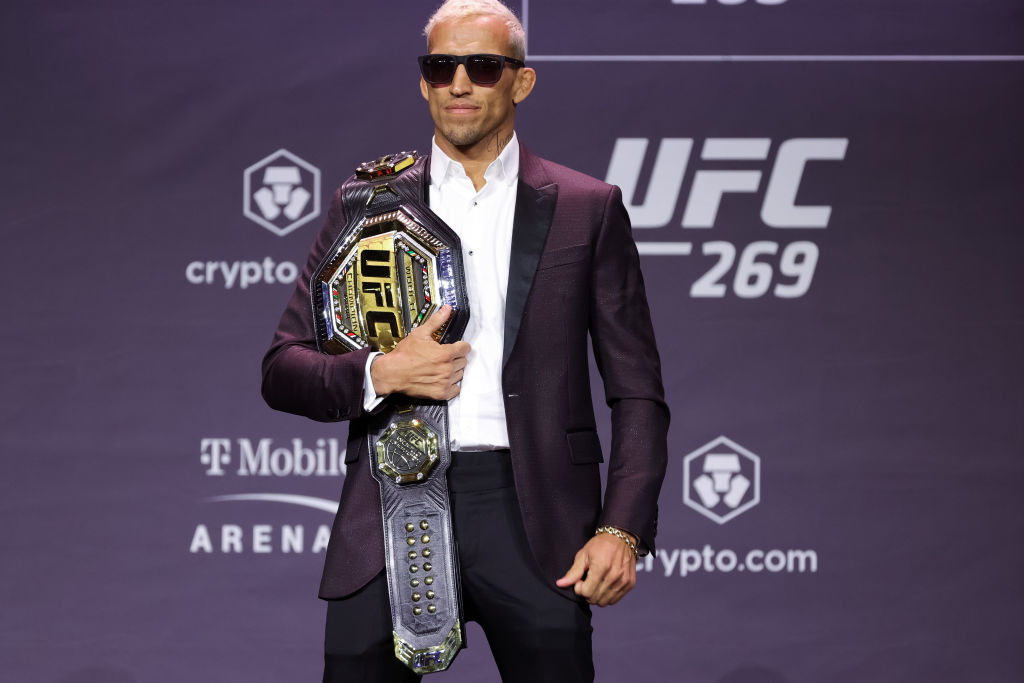 The fight will take place on December 12 in Las Vegas (Nevada, USA) at the T-Mobile Arena and will become the main event of the UFC 269 PPV tournament. The estimated start of the fight is 07:15 Kyiv time. The fight will be broadcast live on Setanta Sports.

Charles Oliveira (31-8, 1 NC) will enter the octagon for the first time as UFC lightweight champion and the first defense won’t be easy for him as Dustin Poirier (28-6, 1 NC) will be in the opposite corner. At the moment, these two are considered the strongest lightweights in the world.

Oliveira’s fight against Michael Chandler at UFC 262 in May marked the beginning of a new era in the UFC lightweight division. Khabib Nurmagomedov retired from MMA after dominating the division and the two fought for the vacant title.

Nobody expected Oliveira to go this far. “Do Bronx” made his UFC debut back in 2010, and while he was always capable of performing brilliantly in the octagon, he seemed too frail to climb to the top of his division, be it featherweight or lightweight.

But now not everyone remembers how young the Brazilian was when he made his debut in the UFC – he was only 20 years old. And at some point, something changed in him. Oliveira’s figure became more muscular, he improved his punching technique, and since he made Clay Guida knock, Charles began his rapid upward movement. Oliveira then finished by submission choke of Christos Giagos, Jim Miller and David Teimour, knocked out Nick Lentz and Jared Gordon, choked Kevin Lee and narrowly missed Tony Ferguson by submission, content with a one-sided victory on points.

Oliveira is now on a long nine-fight winning streak. His opponents got tougher and tougher until he defeated Chandler in May to claim the UFC lightweight title. But the victory was not easy for him. For the first time in Oliveira’s fantastic run, we saw him seriously shaken and damaged. Chandler knocked him down in the first round and almost destroyed him on the ground. But the Brazilian recovered and knocked out the former Bellator champion early in the second round.

Poirier should probably have been fighting for the title after his victory over Conor McGregor in January at UFC 257. However, The Diamond decided to end his trilogy with the Irishman, allowing Chandler to slip into the fight against Oliveira instead.

Poirier has also had a rocky road to the top since his UFC debut in 2011. Having started out in the promotion as a fighter who relies heavily on grappling, “Brilliant” is now one of the best boxer-aggressors in the UFC, having managed to put several high-profile knockout victories on his resume.

Since 2017, Poirier has suffered only one defeat, and that from the undoubtedly best fighter in his division, perhaps even in the history of the UFC – Khabib Nurmagomedov. Poirier came into this fight with a five-fight streak and an interim UFC lightweight belt. He defeated Jim Miller, submitted Anthony Pettis, knocked out Justin Gaethje and Eddie Alvarez to defeat reigning UFC featherweight champion Max Holloway in a five-round fight to become the interim lightweight champion.

In October 2019 at UFC 242, Poirier fought Nurmagomedov for the title of undisputed champion in the lightweight division, and was eventually stopped by the Eagle by rear naked choke in the 3rd round. In June 2020, Poirier defeated Dan Hooker in a 25-minute war, and this year Dustin fought exclusively with McGregor.

At UFC 257 in January, Poirier avenged his 2014 knockout loss to the Irishman by knocking out The Infamous in the second round. And in July at UFC 264, their third fight was stopped after the first round, the reason for the stop was a broken leg of McGregor, who was awarded a technical knockout due to injury.

We have an excellent matchup. At first glance, Oliveira has the advantage on the ground and Poirier on the stand. However, the skills of the fighters should not be underestimated as they both showed finishing ability in all areas.

In fact, the battle can develop according to any scenario. At the moment, it looks like Oliveira has gained a lot of momentum. Of course, Poirier beat McGregor, but how much is the Irishman the top fighter today? This is a question. Oliveira, on the other hand, has dealt with every fighter that stood in front of him since 2018. With 14 submission victories in the octagon, he is, in fact, the most dangerous grappler in UFC history.

Can the champion take Poirier down and then submit him? Brilliant has great grappling, but Oliveira’s takedowns have improved a lot lately and more importantly, he’s still deadly at the bottom.

Considering we’ve seen Poirier work on the floor against Khabib Nurmagomedov, it’s safe to assume that Oliveira could do something similar and win this highly unpredictable submission fight.

Oliveira wins by submission in the 2nd round