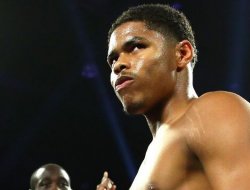 Apparently, the American Shakur Stevenson (18-0, 9 KOs) is now the former world champion in the second featherweight (up to 59 kg).

As we reported earlier, he failed to fit into the category at the official weigh-in before the fight against the Brazilian Robson Conceição (17-1, 8 KOs) on the first try, exceeding the allowable limit by 725 grams. Shakur had two hours to try to drive off the excess. But he apparently abandoned this idea, announcing his farewell to the category up to 59 kg and the transition to the lightweight division (up to 61.2 kg).

“I did everything I could,” Stevenson stated on his social networks. “I have been a pro all my career and have always done weight, but my body is no longer able to do 59 kg. Health comes first for me. In the next fight, I rise to 61.2 kg.

Recall that Shakur until today owned the WBC and WBO titles at 59 kg, and before that he was the WBO champion at 57.2 kg.