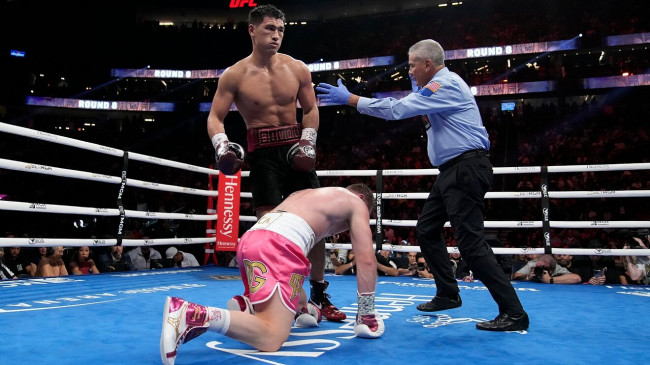 Former Pound leader Mexican Saul Canelo Alvarez (57-2-2, 39 KOs) did not accept the defeat of the WBA Super light heavyweight champion Russian Dmitry Bivol (20-0, 11 KOs) in hot pursuit – he believes that he has worked out to win .

Canelo remains the undisputed super middleweight champion. He won this status in November last year – he stopped the American Caleb Plant (21-1, 12 KOs) in the later rounds.

Former US Champion
turned to his offender after he lost to Bivol: “Just be a man and accept defeat. It’s like a punch to the jaw. Missed – hit back. No need to sculpt excuses. All this dog shit won’t help. There is only one option – to return to the gym as soon as possible and work on the mistakes. If you don’t accept defeat, you won’t be able to outgrow it, you won’t be able to become stronger. Better the bitter truth, even if we don’t like it. The sooner we accept it, the sooner we can deal with it.”

Plant got a good fight with Canelo. Fans really did not like one of the episodes of the fight. During the fight, the American turned to the Mexican with the words: “Agree that I am very good!” Canelo agreed, but soon put pressure on and knocked out his opponent.

Plant claims that the purpose of his appeal to Alvarez was not at all to get approval from a star opponent: “Fuck you stupid fuckers! Really thought I needed his approval? It’s a shame that almost everyone fell for it. I didn’t need his approval because I already knew I was a great fighter, not just a good one. The whole point is that he was sure of an easy victory. And when he realized that this was not going to happen, I wanted him to come to terms with it and admit it.

Interestingly, one of the top US coaches suspects that Canelo simply underestimated Bivol. In the meantime, the winner told what exactly he did not expect from Alvarez and offered to “meet in a rematch for 4 titles.”