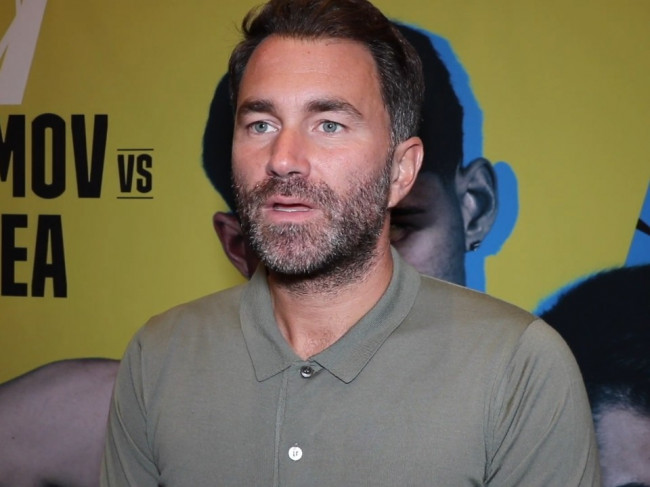 Famous British promoter Eddie Hearn (Matchroom) in
interview commented to the local agency on the conditions for a possible rematch between the current WBA light heavyweight super champion (up to 79.4 kg) Russian Dmitry Bivol (19-0, 11 KOs) and the undisputed middleweight champion (up to 76.2 kg) Mexican Canelo Alvarez ( 57-1-2, 39 KOs).

The functionary also spoke about the reality of the fight between Canelo and the unified heavyweight champion Oleksandr Usyk from Ukraine (19-0, 13 KOs) and spoke about the spectator performance of the Taylor-Serrano fight.

Recall that the Bivol-Alvarez fight will be the main event of the boxing evening in Las Vegas (USA), which will take place on the night of May 7-8. Alvarez-Bivol. Is this “w-w” for a reason? – preview from WMMAA.

Both Bivol and Canelo confirmed that there is a condition for a rematch. Whose decision was it to put it into action?

– The condition for a rematch will only come into effect if the fight has commercial value. In some conditions for revenge – that’s the figure, and it just happens. But in this case it is not an automatic item. The fight must be big enough to do it again. I’ll tell you if Canelo Alvarez gets beaten on Saturday the rematch is absolutely huge because it’s going to be a shock because he’s so good and hard to beat. This contract has different conditions for a rematch compared to other contracts, but I am sure that in any fight Canelo, if he is beaten, then the rematch will be so big that there is nothing to think about.

– There will be talk, it’s strange when the applicant has a condition for revenge.

Bivol: I can knock out Canelo…

— I saw some comments from you, Egis Klimas, Canelo spoke about it. Potential fight against Alexander Usyk in the category up to 90.7 kg, can you tell me something about it? Is he real?

– That’s what happened. After the Joshua fight, I took him to Eddie Reynoso and saw Canelo. We spoke with Canelo, and he told how, according to him, you can beat Oleksandr Usyk. It sounded very simple and straight forward. I asked him: “Do you think you will beat Usyk? He said:” Of course. “He says:” You do the fight in the cruiserweight limit, and this fight is not a problem for me. “And that’s what I talked about yesterday to the media. It’s powerful it was like Canelo is fighting Usyk next fight which is not true but I believe Joshua will beat Oleksandr Usyk but if not you have seen Canelo potentially go all out at 79.4kg and maybe move higher to fight Macabu. In that case, he will 100% fight Oleksandr Usyk in a pound-two limit above heavyweight. I think it’s real. There are only a few tests that Canelo will not accept. And he will have no problems fighting Oleksandr Usyk.

DAZN announced that 1.5 million people around the world watched the Taylor-Serrano fight last week. What is your reaction to this?

– Fantasy. It is obvious that a large share of these figures falls on the British market, Ireland and the United States. Fantasy. There is not only the number of viewers, but also new subscriptions in these countries. It was a big event. One of the most satisfying things is that this could be the greatest fight in the world.