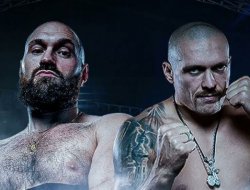 The reigning heavyweight champions Briton Tyson Fury (32-0-1, 23 KOs) and Ukrainian Oleksandr Usyk (20-0, 13 KOs) plan to meet in a full-time fight early next year – they will determine the first absolute heavyweight in the era of four belts.

An obstacle to the organization of this fight may be the recent decision of the IBF – they require the Ukrainian to conduct an immediate mandatory defense with the Croat Filip Hrgovic.

For this reason, media representatives turned to WBC President Mauricio Suleiman. He reassured everyone: “The WBC has always tried to support unification fights in every possible way. And this one included. We believe that this will be just a great fight for the whole world of boxing.”

Despite this, Suleiman still added that “their support for unification fights has its expiration date – it ends at the moment when holding such a fight violates the rights of the mandatory challenger.”

The WBC President recalled that a fight between American ex-world champions Deontay Wilder and Andy Ruiz will soon take place – they will fight for the title of mandatory challenger according to the WBC.

Meanwhile, promoter Eddie Hearn said: “I wouldn’t be surprised if Fury fights not with Usyk, but with Joshua. And he is also confident that heavyweight belts will be free soon.